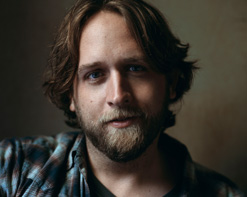 Howdy programmers, it’s Andy Gesner and the HIP Video Promo staff with a wiseacre country singer-songwriter whose clever and often hilarious lyricism has achieved him award-winning national recognition. Of course, we are referring to Texas troubadour Hayes Carll and his fantastic video for “Another Like You.”

“Another Like You” is a boozy duet featuring southern rock figure Cary Ann Hearst indulging in some hilariously insulting foreplay, as the opposing fantasized subjects of the track tumble toward bed. The song clashes Democratic and Republican views in a hilarious and clever country rock romp. Hayes Carll has a dry, chapped voice, bolstered and puckered by Texas twang. His music puts forth a fair amount of bluster, steeped in wanderlust or whiskey, or both at once, which will have you spinning his songs all night long.

It is exactly this style that has earned Carll allusions to Townes Van Zandt and Bob Dylan, while garnering him massive critical acclaim. Carll has found success on the national Americana radio charts, receiving an Americana Music Award in 2008. He is once again nominated for this year’s AMAs in the Artist Of The Year and Song Of The Year categories! The award ceremony is scheduled for October, 2011. Carll has also earned nods from every major music publication around the nation. Rolling Stone has given Carll’s fourth record, KMAG YOYO, which is a military acronym for “kiss my ass, guys, you’re on your own,” an excellent mark, stating “now that’s country music!” SPIN has given the album a whopping 9 out of 10, naming Hayes Carll one of their “11 Next Big Things in 2011.” KMAG YOYO has also received much praise from The New York Times, The Los Angeles Times, The Washington Post, The Austin American-Statesman, Daily News, Paste, The Onion, The Observer and many many more! Needless to say, Hayes Carll has made quite a name for himself over the past several years, despite being last in his graduating class.

The “Another Like You” video carries a similar message that the song does. Carll’s hard partying Democrat trades insults with a saucy young Republican; the mismatched twosome discover that, as Carll points out, “alcohol and sexual attraction can overcome a lot.” Before you know it, the couple are going at each other like a pair of rabbits. The clip also features a hilarious news broadcast which pits MSNBC against FOX, where the two reporters argue from separate TV squares, only to end up in the same one making out! Some of the best and subtle moments include the absolutely sidesplitting ticker messages in the news broadcast. The big kicker at the end of this riotous clip when one of America’s most famous “opposites attract” examples steal the screen. Turns out the music video was being watched by Democratic political campaign consultant James Carville and his Republican campaign consultant wife, Mary Matalin, who proceed to argue about the video.

Hayes Carll maybe a jokester in song, but he takes his craft seriously, especially when it comes to a rigorous touring schedule. Remember, Hayes Carll’s first release was the first self-released album to ever reach number one on the Americana charts! Carll is currently on summer tour spanning our great nation and Canada. If you would like a chance to experience Carll live or interview him for your show, please reach out to us right away.

We are thrilled to bring you yet another phenomenal work of art from the good folks at Lost Highway Records. Join us in exposing this witty and memorable clip. If you need more info, call Andy Gesner at 732-613-1779 or e-mail us at info@HIPVideoPromo.com. You can also visit www.LostHighwayRecords.com and www.HayesCarll.com to find out tour dates and more information about Hayes Carll.