Heatbox “Pizza Funk” & “I Need A Jack And Coke” 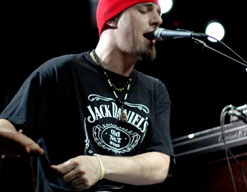 Greetings fellow music lovers, it’s Andy Gesner and the HIP Video Promo staff, here to help call your attention to one of the most unusual and arresting vocalists we’ve come across in years. He can sing like an inner-city roughneck, rap like a hardcore emcee, scat like a forties jazzbo, and beatbox like Rahzel or Doug E. Fresh. And thanks to some creative and efficient use of loop pedals, the incomparable Heatbox can do all of these things at once! To see Heatbox in concert is to be amazed — he creates a cascade of voices, each new layer supplementing the last, piling melodies upon melodies and strange vocal sound effects upon precision beats. Imagine if Bobby McFerrin was schooled on vintage hip-hop records (and had a much better sense of humor) and you’re halfway there; the other half really can’t be understood or explained without hearing Heatbox in action.

On his tremendously entertaining recordings, Heatbox is scarcely less astonishing. “Pizza Funk”, his new single, is a high-speed collision of alt-rap, swing jazz, G. Love-style acoustic soul, and Tenacious D absurdism. The two-minute “I Need A Jack And Coke” begins with an impossibly-low bass, adds to it a tenor harmony, and, after a “drink breakdown” complete with rhythmic gurgles, culminates in a crazed thank-you chorus. Elsewhere on System, his full length debut, Heatbox’s alter ego Balgator warns listeners of his unstoppable evil, gets fished out of a suburban sprawl by a vagrant, and confronts the listener with a microphone in one hand and a glass of whiskey in the other. If modern alternative pop often seems devoid of personality, here’s a genuine character, and one who makes his presence felt every time he approaches the microphone.

In his hometown of Minneapolis, Heatbox is already considered an underground star; an autumn tour with the like-minded That 1 Guy has promises to introduce his brand of madness to audiences all over the country. Chances are, Heatbox is coming to your town — but if he isn’t, these two videos are the next best thing. The vocalist introduces himself with the combination of consummate authority and high slapstick that informs all of his work. In the very funny “Pizza Funk” clip, Heatbox finds himself assaulted by the very object of desire: slices of fresh pie. Yes, wherever he goes, he’s pegged by pizza. Tomato sauce stains on his clothing, he travels around Minneapolis in search of his assailant. It isn’t his neighbors, and it isn’t the delivery boy, either — it’s a gang of masked ninjas armed with slices. In a scene weirdly reminiscent of Platoon, Heatbox is “gunned down”, dropped in his tracks by a pizza barrage.

The brief clip for “I Need A Jack And Coke” explores a different kind of misfortune: inattention by bartenders. Heatbox and his friends are stuffed into a crowded bar; the joint is hopping, and the vocalist can’t get a drink. Once more, he’s desperate, but he can’t get any service; instead, an annoying pal (who sings the part of one of Heatbox’s high overdubs) receives the drink that the vocalist is craving and busts into an over the top, in-your-face celebratory dance. Once more, everything is played very successfully for laughs, and by the whole cast — for extra laughs, check out the priceless reactions of the partygoers gyrating behind Heatbox.

We’re very excited to be working in tandem with Mark Grunhoefer and the whole MJG Productions crew to bring you these most excellent clips. They’ve also been kind enough to hook us up with copies of System for your listening pleasure and on-air giveaways so drop a line if you’d like to get your hands on some or if you’d like to catch up with Heatbox for a video interview when he comes to your market. If you need more info, call Andy Gesner at 732-613-1779 or e-mail us at info@HIPVideoPromo.com.