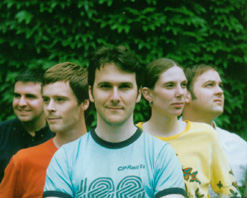 Happy Spring! It’s Andy Gesner and the staff from HIP Video Promo. Here at HIP, we like to think that every video we share with you is remarkable in its own way. But every now and then, we encounter a clip that we’re certain is going to blow minds – and “Try Telling That To My Baby” by The Heavy Blinkers is that sort of clip. It’s a game of Candy Land come to life – a Technicolor journey through a world populated by smiling gumdrops, jellybeans, ice cream sundaes, and singing candy corns. If you’ve got a sweet tooth at all, it could send you straight to the candy shop. Even if you don’t like confections, you’re likely to be mesmerized by this Fluorescent Hill-animated swirl of color and shifting patterns.

The music of the Heavy Blinkers seems to invite comparisons to candy. The Halifax five-piece creates lush, orchestral, meticulously-arranged pop songs, each with honeyed vocal harmonies and a delicately crafted and irresistible melodic hook. Their chamber pop owes much to Brian Wilson, Burt Bacharach, Belle & Sebastian, The Left Banke, and Sean O’Hagan, but the quintet obeys the first rule for bands working this territory: be original. These melodies and arrangements might remind you of music from your childhood, of AM gold, and of long summer days; but while they’re all richly associative, they’re never derivative. Every Heavy Blinkers song is like a separate orchestral composition or tiny symphony: bright with melodic passages and suffused in reverb and radiance.

The Night And I Are Still So Young, their first album for Endearing Records/Cooking Vinyl, has been called an indiepop masterpiece by critics, webloggers, and fans alike. The All-Music Guide assigned it four and a half stars, praising the group’s songwriting and instrumental talent, and testifying that “the Heavy Blinkers have truly crafted a classic album, the kind of record that will show up in ‘From the Archive’ in ten years.” Back home in Canada, FFWD called the Blinkers the Beach Boys for the new millennium – and a reviewer there wrote an open letter to Brian Wilson, entreating the SMiLEauteur to pick up a copy of The Night And I at all costs. “Try Telling That To My Baby” is quintessential Heavy Blinkers – slow, sad, delicate, gorgeous, warm as a fading summer evening.

The Fluorescent Hill team seems to specialize in bittersweet left-of-the-dial clips for gentle indiepop bands – their video for The Album Leaf’s softly aching “On Your Way” was a heartbreaker, and not just because the animated forest backdrop were breathtaking.  Fluorescent Hill drew little brightly-colored creatures that played music under the leaf cover until floating toward the sky and evaporating like soap bubbles. Their ability to make the viewer care about the fate of small animated circles lent an almost unbearable poignancy to the clip.  It’s a skill they’ve transferred to their work for The Heavy Blinkers. The “Try Telling That To My Baby” video isn’t just fantastic – it’s also a tale of a cupcake that loves and loses, and is ultimately, restored.

The cupcake protagonist wakes in a forest. But the light shining from the candy city is too alluring to ignore, and before long, he is skating down a jelly river under peppermint arbors. This is a wild, kinetic, and occasionally chaotic town, however, and in the course of the revelry, he loses his maraschino cherry. Getting the cherry back requires a ride on a giant cookie (a cookie that sings backing vocals, no less), anointing atop a cake, and the cooperative effort of a series of candied fruit slices. Every shot in the clip is vibrant with bold color, and every movement made by the dancing sweets is marvelously choreographed.  Wilder still are the facial expressions: wide smiles, looks of crushing despair, a kind of uncontainable exhilaration. In short, they behave exactly as you’d expect candies to; and that’s a trip to watch.

Here at HIP we are excited to be working with Jeremy Morrison and all of the cool folks at Cooking Vinyl to bring you this delicious clip! We have plenty of copies of The Night And I Are Still So Young for on-air giveaways to satiate your Heavy Blinkers needs. If you need more info, call Andy Gesner at 732-613-1779 or e-mail us at info@HIPVideoPromo.com. You can also visit www.CookingVinyl.com or www.HeavyBlinkers.com to find out more about The Heavy Blinkers.