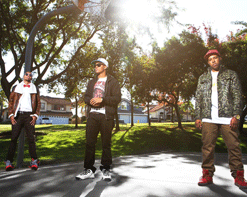 Today, the radio is filled with all kinds of similar sounds. Hip hop has never sounded more imitated; recycling producers, lyrics and ideas between artists from every generation. But not in the High Class Music Group studio. More or less a laboratory, HiCMG takes the construction of each song seriously. So much that, popular sound engineer Arkhitect is the resident producer of endless, memorable tracks. Through these doors come artists who are motivated by much more than money and fame, they all possess a burning desire to make their own mark on the hip hop scene, each one mastering their unique sound in the process. After catching the eye of Travis Barker, HiCMG and Travis Barker’s Famous Stars and Straps teamed up for their first project together. The end result is the new track “Sippin’” which showcases the entire roster in an anthem that perfectly encompasses what HiCMG is all about.

Ask Branden Vader when he’s killing the game with hooks that are out of this world. He’s not just writing lines for himself; he’s writing rhymes that are set to inspire and enquire what he will say next. He drowns himself in rhetorical strategies and indispensable harmonies. Don’t let his clever boyish charm get you, he puts all of the cards on the table, not afraid to call anyone out. For him, “it’s a walk in the park, but he’s still running.”

Michael Donatello is all for spreading good vibes. HiCMG’s very own Mike D is a voice you’ll never forget. Just turn up and listen. He’s In the Zone. If you ever catch him in the club he’s the one having a celebration poppin’ bottles and putting one in the air. Just listen to his impeccable delivery every time. Timing and style are his weapons of choice in every song.

BEATNET is everything High Class. He understands the formula and is Southern California’s most recent threat: he can write, rap, and produce. This bad boy isn’t backing down; he appreciates the finer things in life. Nobody in Hip Hop can draw an audience through his own experiences with metaphors, passion and parodies better than High Class’s very own family member

What better way to showcase this roster than to put them together on one definitive track that is all things HiCMG? The new track for “Sippin’ ” is spot on encapsulation of what you’d expect from a group that touts themselves as High Class. There’s wild parties, expensive champagne being popped, sexy models, and just straight up going insane! Their red Solos are overflowing and there’s a generous amount of intoxicants to go around, you’ll probably feel hung over just watching this clip. The crew trades line and just when you you’ve comfortably settled into one flow, it changes up and turns it all upside down. This spirited video is a raucous good time and is poised to be the breakout party anthem of 2014!

The High Class Experience is one that leaves a lasting impression that is always heart felt. Their goal and promise is to connect with the fans and free them of societal stresses, and “Sippin’” does just that! Please contact us at (732)-613-1779 or email us at info@HIPVideoPromo.com .