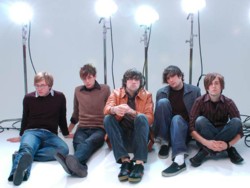 Hello programmers! It’s Andy Gesner and the staff from HIP Video Promo here to bring you another superlative clip by an emerging buzz band. We are proud to continue working with Drive Thru Records, and with a band that we Garden State rockers already know well. Stanhope, New Jersey is a small village in the western reaches of the New York metro area. But a thriving rock subculture has flourished in these quiet hills – and Hidden In Plain View is at the forefront of this movement.

Hidden In Plain View has a commitment to foregrounding passion, emotion, and rock energy, and an aptitude for writing brutally honest narratives about conflict and the hardships of growing up. HIPV front man Joe Reo is an inexhaustible fighter – angry, defiant, uncompromising, courageous. His characters suffer trauma, but they spit back; they find doors slammed in their faces, but they take refuge and pride in solitude and outsider-hood. On the epic and desperately sad “Garden Statement,” Reo turns a tale of defeatism into a rallying cry for the disused and the rejected. Hidden In Plain View might take their lumps, but they’re going to go down swinging.

It’s not all furious modern rock; there are poppy moments on Life In Dreaming, too. But the New Jersey five-piece has chosen to showcase “Ashes, Ashes” as proof of their tenacity and strength in songwriting in this new video. The song begins with twenty or so relatively peaceful seconds – but then explodes into a torrential two-guitar assault. The band barrels through a start-stop verse, but can barely contain their energy and fury; when they reach the tense bridge, the group builds to a climax twice before pulling back and playing the outro in menacing half-time. Throughout, Reo howls and bellows over the maelstrom, coaxing every ounce of outrage and betrayal from his tattered but oh-so-powerful voice.

The video for “Ashes, Ashes” communicates some of the energy that this band can generate in a performance setting (there’s no way it could communicate all of the energy; for that, you’d need a Sensurround theatre). This is a band that endeavors to lower the boundary between itself and the audience: they play on the floor, at the same level as their fans. Reo sings directly into the faces of the delirious crowd; swishing his tousled hair like Tommy Stinson, leaning back to impart extra emphasis. It’s claustrophobic, yet triumphant somehow – a basement rite, celebrated by defiant kids drawing strength from each other.

But that’s just the performance footage. There’s also a crime narrative running through the clip: the boys in Hidden In Plain View are involved in some sort of heist. We watch four of them hanging nonchalantly outside a seedy diner, synchronizing their watches, running for cover beside a chain-link fence. Pursued by two policemen, they race to meet their accomplice (the fifth band member) in the getaway car. As Reo reaches the “all fall down” outro, they’re foiled – a fight breaks out, they’re dragged from the hatchback and thrown to the asphalt by the troopers. As the clip ends, the driver of the getaway car sneaks away with the goods, leaving his erstwhile compadres facing the business end of the policemen’s’ nightsticks.

Here at HIP we are thrilled to get to work will all the dedicated folks at Drive Thru Records. Richard and Stefanie Reines have assembled an awesome team and we will be there for you to meet all of your Hidden In Plain View needs in a timely fashion. We have CD’s, stickers, and Drive Thru magnets for on-air giveaways, and if any programmers would like to see this awesome band live, HIPV is on tour now with punk rock pals HelloGoodbye and Punchline. The quintet is also amenable to do video interviews and IDs while they’re out on the road. If you need more info call Andy Gesner at 732-613-1779, or email info@HIPVideoPromo.com. You can also visit www.HiddenInPlainView.com or www.DriveThruRecords.com at the links below to find out more about Hidden In Plain View.