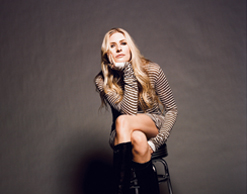 Greetings, it’s Andy Gesner from HIP Video Promo staff bringing you another collection of videos from a must-see artist. When Holly Williams released The Ones We Never Knew, her gorgeous debut album, much was made of her pedigree: granddaughter of Hank Williams, daughter of Junior and half-sister to Hank the Third. Much was expected, and Williams delivered – her stunning voice and her equally breathtaking songs justified her claim to the legacy of country music’s first family. To Nashville veterans, Holly Williams seemed to be her grandfather’s true heir: a true, bold, tough-minded, no-bullshit American singer-songwriter, poised and passionate, equally comfortable in a honky-tonk or a high-class music hall.

Now comes Here With Me, the still-young singer’s followup, and we’ll say without reservation that it’s one of the finest albums released this year – in any genre. It delivers on the promise of The Ones We Never Knew, and establishes Holly Williams as a roots-music master in her own right. Williams is a first-rate interpreter (check out her beautiful read of Neil Young’s heartbreaking “Birds), a candid and moving confessional writer (“Mama” and “Without Jesus Here With Me” elaborate her life-story in courageous, vivid detail), and a convincing traditionalist (demonstrated on the rip-roaring “A Love I Think Will Last”, a duet with alt-country favorite Chris Janson). She’s also a stellar acoustic guitar player and pianist, and a brilliant singer with impeccable timing and tone. Nashville already loves her, and so does CMT; considering Williams’s talent, Here With Me seems virtually certain to cross over to the mainstream pop audience.

Indeed, producer Justin Niebank (Brad Paisley, Keith Urban, many other country luminaries) presents Holly Williams as an artist whose classic qualities easily transcend genre. Here With Me draws from American folk music, roots rock, traditional country, and gospel; the arrangements are lean and muscular, and the sound is radiant. “Three Days”, the latest single, is a plaintive and lovelorn acoustic track that resembles Lyle Lovett’s early work; stately piano ballad “Alone” boasts a timeless pop melody worthy of Neil Finn and Crowded House. And when she plugs rocks – as on “Keep The Change” – she does so with the natural conviction of Tift Merritt and the mass appeal of Sheryl Crow.

Holly Williams has made videos for all three of these excellent songs, and we’re thrilled to be bringing them all to you on a single reel. The “Three Days” and “Alone” clips are both set in Europe, and “Keep The Change” is resolutely American; but Holly Williams strides confidently through each, and commands attention in every frame. In “Alone”, she’s at the piano in the Old World, singing to the ceiling of a deserted club; the architecture, bridges, and canals outside are gorgeous, but the city is depopulated. As Williams walks the streets, her loneliness is palpable – but so is her wonder. The main character of the “Three Days” clip is just as enraptured by the Paris scenery, and, in a way, just as lonely. She’s a young woman in a torrid affair with a Frenchman she hardly knows – he makes love to her, photographs her, and gets as close as he can to her, but there’s always a haunting feeling of separation and distance. It’s the “Keep The Change” clip that promises an escape from solitude and starkness – even though Holly Williams is alone throughout the video. This time, she doesn’t just have a guitar: she’s also got power tools. Stranded in a house with no furniture and no adornment, she totes a chainsaw from room to room. There are horizontal slashes in the drywall, and a mouse-hole just above the floor that threatens to swallow Williams as she sings. Finally she smashes a garage window, steps through, and walks away.

It is a true pleasure to be working once again with Tom Lord and the crew at Mercury Records to bring you all three of these outstanding videos. If you need more info, call Andy Gesner at 732-613-1779 or e-mail us at info@HIPVideoPromo.com . You can also visit www.UMGNashville.com or www.HollyWilliams.com to find out more about Holly Williams.