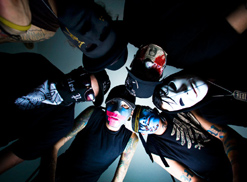 Howdy programmer friends! It’s Andy Gesner and the staff from HIP Video Promo, here to shake up your day an incendiary clip by a new group unafraid of courting controversy. What do hip-hop pioneers N.W.A. have in common with the masked rap-rocking punks in Hollywood Undead? Probably more than you’d think. For starters, both are six-man acts from the seamy underbelly of Southern California. Both are blunt, caustic, gangster-minded, hedonistic, celebratory; both risk danger and occasionally provoke outrage. Most importantly, vocalists in both acts have gained legitimate notoriety by speaking their minds. Now, it was a little easier to astonish audiences in 1988 than it is twenty years later, but Hollywood Undead seems to be managing just fine. In Jonas Akerlund’s clip for “Undead”, the lead single from the upcoming Swan Songs, Hollywood Undead throws as much sex, booze, and hotel-room smash-up violence at the camera as they can manage – and that turns out to be one hell of a lot. And the band pays tribute to N.W.A. in the video by re-creating the famous camera-up “beatdown” shot from the cover of Straight Outta Compton: not once, not twice, but over and over again.

It certainly helps that the six members of Hollywood Undead are menacing enough to pull the shot off. They’re physically imposing – big, tough, and aggressive – and in the “Undead” clip, they always seem to be advancing toward the camera, out of your nightmares and into your living room. Then there are the masks: primal, symbolically-rich, terrifying, inhuman. These aren’t complex, theatrical Slipknot masks — they’re simple, brightly-colored, brutally straightforward. They’re post-racial and post-apocalyptic; they speak straight to the unconscious.

The six members of Hollywood Undead never take the masks off; their faces are, for all practical purposes, manufactured by the band. Alarming, certainly – but it’s in the long tradition of self-fashioning in California rock. Jonas Akerlund’s incendiary, clever, arresting, id-driven video for “Undead” plays with the conventions of the L.A.-party clip: the musicians get down in a creepy no-tell motel room with barely-dressed women, but they don’t show their faces, and their relationships with the girls are left deliberately ambiguous. In fact, when the women attempt to get it on with the Hollywood Undead rockers, their efforts are only half-realized. A topless blonde mounts a masked rapper on the motel bed; he reacts first by treating her roughly, but soon lies lifelessly on the mattress, draped in an American flag. She takes what she can get, and collapses on him, clearly frustrated and discontent. Model-thin women make out on the motel sofa: on one level, it’s a typical male fantasy, on the other, it’s a perfectly natural reaction given the masked mens’ disinterest. Two women play with each other in a filthy shower stall (the same shower used to store the booze cooler) while a Hollywood Undead rapper vomits in the toilet. Later, the bandmembers will take sledgehammers to the walls of the room; the girls, meanwhile, are tangled up in quarter-inch cables, writhing and twisting, but not exactly trying to get free.

If the members of Hollywood Undead don’t seem clearly individuated in Akerlund’s clip, that’s intentional: they call their supporters the Undead Army, and the video is meant to feel like a gang assault by urban monsters. Still, each emcee has a distinctive style – both in dress and on the mic – and in the “No. 5” clip, we’re shown each member, one at a time, as they jump from the back of a truck onto the streets of L.A. The footage freezes and the rappers’ names are scrawled on the screen in spray-paint font.

We are proud to be working with Simi Dube, Val Pensa and the rest of the team at A&M Octone Records to champion the two new Hollywood Undead videos. We are also in possession of a limited supply of their newly released album Swan Songs, so be sure to reach out to us promptly for your on-air giveaway needs! And don’t miss Hollywood Undead on tour for the next month, so get in touch if you want to set up interviews or video IDs when the band comes through your market! If you need more info, call Andy Gesner at 732-613-1779 or e-mail us at info@HIPVideoPromo.com.