The Honorary Title “Stay Away” 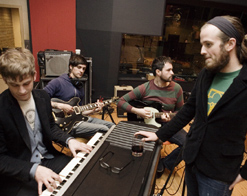 Hi cherished programmers! It’s Andy Gesner and the staff from HIP Video Promo, here with a new clip from an inventive new band with a prime-time sound. Those who know The Honorary Title only fromAnything But The Truth, their heralded and well-reviewed debut, are in for a pleasant surprise. Scream & Light Up The Sky, their latest effort, is every bit as tuneful, direct, and identifiable as its predecessor – but the group has turned up the amplifiers and given their sound a jolt of energy and volume. The Honorary Title haven’t put away the acoustic guitars (and why would they?, when they play them so well?), but it’s no exaggeration to say that they’re playing things a bit rougher this time out. The addition of a full-time bassist and drummer to the lineup has completed the arrangements and added a newfound sense of conviction and coherence to Jarrod Gorbel’s sincere songs. In short: The Honorary Title has always has always rocked, but now they’re a true rock *band*

The crack rhythm section has also added to the Brooklyn band’s cinematic sweep. Much of Scream & Light Up The Sky evokes the grandeur of Jimmy Eat World or Saves The Day; meanwhile, producer Rob Schnapf, best known for his work on Elliott Smith’s seminal Either/Or, preserves the group’s intimacy. Small-screen programmers have come calling: The Honorary Title recently performed on an episode of One Tree Hill. “Stay Away”, the lead single from Scream & Light Up The Sky, was featured on the hit program’s most recent accompanying-music CD. It’s a complex story of a relationship in trouble; ambivalent, smart, and articulate, “Stay Away” is an ideal soundtrack for a story of romantic compulsion and impending heartbreak. “If you’re using me, do it slowly”, begs Gorbel, “make it last until I have to go”.

Travis Kopach specializes in matching intriguing images to compelling songs. He was the filmmaker who famously put the fishtanks on the heads of the actors in Panic At The Disco’s unforgettable “Lying Is The Most Fun” video; his set direction in Straylight Run’s clip for “Soon We’ll Be Living In The Future” breathed twisted life into dysfunctional-family living rooms. His bold use of bright color – on display in clips he has shot for Koufax, Thursday, All Time Low, and many others – returns in the “Stay Away” video; in fact, it’s arguable that the primary colors are the true stars of clip.

The clip begins in the midst of an action sequence; since we’re not shown the beginning, the images are intentionally ambiguous. Jarrod Gorbel slips from a high precipice in slow motion – we watch his limbs splay as he begins to plummet through black space. A young woman stands on the cliff; she reaches out for him, but her expression is difficult to read. It’s entirely possible that she’s pushed him off: there’s no way to tell for sure. After pausing a moment, she leaps after the Honorary Title frontman. But she isn’t following him; not exactly, anyway. Beneath them are a pair of rectangular pools – one bright red, the other cold blue. The two falling lovers (if that’s what they are) splash into each, like coins tossed into fountains. Both Goebel and the woman are saturated in color: each sharing the same experience, yet utterly separate.

We are stoked to be working with Adam Rubenstein and the team over at Doghouse Records to champion another one of their stellar bands. We are also in possession of a limited supply of their new CD Scream & Light Up The Sky, so get in touch quickly for your on-air giveaway needs! If you need more info, call Andy Gesner at 732-613-1779 or e-mail us at info@HIPVideoPromo.com. You can also visit www.DoghouseRecords.com to find out more about The Honorary Title.