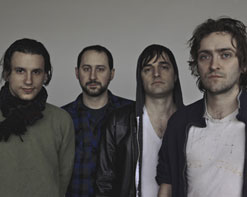 A warm and sunny hello to all of my friends in the programming world! This is your pal Andy Gesner of HIP Video Promo with a visually stunning and deeply intriguing clip from NYC’s Hooray For Earth. As this band deftly demonstrates, the new sound of American indie rock has expanded well beyond the confines of guitars, bass and drums, into a world of possibilities. Incorporating elements of 80’s synth-pop and 90’s industrial, this is an art form where the production is as essential to the experience as the song itself. “True Loves” – the title track from their forthcoming LP due out on Dovecote Records next month – is an outstanding achievement of those sonic ideals and a downright infectious tune. It’s a song that sounds at once mechanic and organic, heavy and weightless, dreamy and driving.

And while Hooray For Earth may only just now be making waves on the scene, the band began to take shape in Boston way back in the late 90’s when bassist Chris Principe asked singer Noel Heroux to join his band. At the time they were both in high school, and it wasn’t until 2006 that Hooray For Earth released their self-titled debut, introducing the world to their brand of expansive indie art-rock. They followed that up with their 2008 Cellphone ep, making enormous sonic strides, and establishing themselves as a band to watch. But in 2010, after adding new drummer Joseph Ciampini, the band discovered a new, exciting energy and took their sound to new heights with the critically-acclaimed Momo ep, sounding dynamic, confident, and firmly on the verge. Their forthcoming LP (and first for new label Dovecote) True Loves is hotly anticipated, and if the title track is any indication, Hooray For Earth should start preparing for its close-up.

The video, directed by L.A.-based production team Young Replicant, is a must-see. Somewhat of a minimalist sci-fi epic, “True Loves” begins with a slow-motion shot of someone running for his life in the middle of a barren wasteland, pursued by a terrifying hunter on horseback wielding a bow and arrow. Their garb looks both ancient and futuristic, so its unclear when the chase takes place (the costumes for this video were handsewn especially for the video by the director and his friends.) Yet, after the hunter launches an arrow at the running man, he dives into strange and enchanting cloud of smoke that seems to be simultaneous exploding and imploding and finds himself transported out of harm’s way onto the rocky shores of a beach. The visual narrative continues, as the hunted man walks the strange landscape, cracks open a floating moon rock, and transports yet again into a darkly-lit modern home, experiencing some strange gravitational effects. All the while the hunter is hot on his tail. While this all sounds a bit strange on paper, the video itself is haunting, gripping and gorgeously shot. The final confrontation between the two characters is a doozy.

What we have here with Hooray for Earth’s “True Loves” is a fantastic pairing of sound and vision, where both elements are massive works of art in their own right, and together their impact is exponentially increased. You’ll find yourself humming Heroux’s melody, moving as the beat echoes in your head, and recalling the striking images of the hunter and the hunted. We hope to hear more music and see more videos from Hooray For Earth after True Loves drops on June 7th. Pitchfork compared them to MGMT, Yeasayer and Passion Pit, and in reviewing the single, they wrote, “…what really sells “True Loves” is the song’s billowy melody and light reggae lilt, which contrast with the hint of bass grind underneath. It sort of floats along and pounds forward at the same time, and one way or another it wants to carry you along with it.”

It’s our great pleasure to be working once again with the folks at Dovecote Records. They’ve hooked us up with plenty of advance copies of True Loves that we’d love to share with you. The band will be heading out in June with HIP alumni Architecture In Helsinki, so get your requests in now! If you need any more information you can call Andy Gesner at (732)-991-5140 or email us at info@HIPVideoPromo.com. You can visit www.DovecoteRecords.com or www.HoorayForEarth.net for more info about Hooray For Earth.