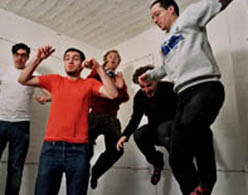 Summer salutations to all my music video cohorts! It’s Andy Gesner and the enthusiastic staff of HIP Video Promo, back with another terrific and innovative video from a superb new indie act. Hot Chip isn’t a household name in America yet, but since the release of their 2004 debut, they’ve become one of the best-loved pop-electronica acts in their native UK. That album, Coming On Strong, established the London quintet as quirky, edgy sonic landscapers with an ear for detail and a evident love for stateside hip-hop. Songwriters and singers Alexis Taylor and Joe Goddard put playful lyrics to bumping beats and hooky synthesizer riffs, and made one of the most warm, immediate and winning electronica albums in recent memory.

With The Warning, their follow-up, they’ve outdone themselves. It’s a set of twelve songs that manage to be as poppy and inviting as the best indie music without sacrificing any of their trademark experimentalism. Plus, there’s a brashness here, borrowed from rap perhaps, but made Hot Chip’s own, that is truly exciting. “There’s not many other bands out there who can fuse rave-era beats, crowd roars, battling 303 drum patters and swelling synths to make a coherent, electrifying whole”, raves the NME, before saying that it’s about time fellow journalists began singing Hot Chip’s praises. Rolling Stone, too, praised the album, lauding its “idea-packed grooves”, and calling its hybrid sound a mix of Belle & Sebastian and Apex Twin (pretty dead on, in our opinion). The Warning broke into the British Top 40 – a remarkable feat for a record this challenging – and spawned three hit singles. A few months ago it was nominated for the Mercury Prize, given annually to the best album released in the UK.

“Over And Over”, the lead single from The Warning, is propulsive and irresistible; a dry, witty riposte to the band’s critics, and a love-letter to their chosen form. “Laid back?”, asks Taylor, “I’ll give you laid-back”. It’s not clear whether he’s making a promise or a threat. “Over And Over” equates sexual response and practice to the “joy of repetition” (a reference to Prince) common in electro pop songs. Sly and brainy, Taylor and Hot Chip are also intrinsically sympathetic and approachable.

Nima Nourizadeh has made a name for himself in the Britpop underground by shooting clips for some of the hottest indie and electro acts in the country: Lady Sovereign, Art Brut, White Rose Movement. His interpretation of “Over And Over” plays up Hot Chip’s endearing side. Shot in front of a “green screen”, the band performs in an angular and makeshift living room that resembles the surface of a pool table. White window-frames, wind-chimes, tape stripes and a small door decorate the single-color background. Dressed in all-green body suits dotted with black circles, extras hover behind Hot Chip, mimicking their actions, and at one point seizing them from behind as they play, a la “Burning Down The House”. Letters from the song appear on a vintage computer screen, members of Hot Chip look through eye-exam lenses, two “green” men rotate another atop a desk chair.

Late in the clip, a red balloon floats into the frame. Punctured by a giant pencil, it sprays color over Hot Chip, changing their clothing from white to crimson. By playing with simple props and primary colors, Nourizadeh and Hot Chip show how you don’t need to break the bank to make a fascinating and evocative video. Just as it is in Hot Chip’s music, sophisticated and thought-provoking wholes can be built from the simplest trace elements.

The HIP staff and I are very stoked to be working with Krista Crews at Astralwerks to bring you such an awe inspiring talent such as Hot Chip. Astralwerks has brought us some of our favorite and most successful campaigns in the past and it’s always a pleasure to work with them. Hot Chip is currently touring in Europe but it would be our greatest pleasure to set up video interviews and IDs for you when they come thorough your market later this year! We are fully stocked with copies ofThe Warning, so please don’t hesitate to get in touch if you would like to set up on-air giveaways. If you need more info, call Andy Gesner at 732-613-1779 or e-mail us at info@HIPVideoPromo.com. You can also visit www.Astralwerks.com or www.hotchip.co.uk to find out more about Hot Chip.