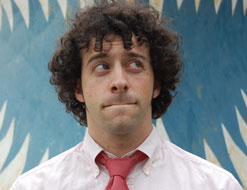 Greetings everybody, it’s Andy Gesner from HIP Video Promo, writing to you to share a clip from a real character: Hugo is a theatrical piano player with a big smile and an ear for sweet pop. And much as we love glossy, high-budget clips, it’s often refreshing to share a video by an independent artist with plenty of ingenuity and imagination.

Three clips in, he’s developed something that many mainstream artists never do: a distinct visual aesthetic, rooted in nostalgia, community theatre, and pure, playful fantasy. It’s one that suits his music perfectly. Hugo writes the way Ben Folds or John Flansburgh does — expressive, intelligent, a bit nerdy, but surprisingly soulful (Sirius/XM even dubbed him “Elvis Costello Folds Five”). His songs can be lighthearted, but he’s no joke-rocker; there’s a tough core of real emotion within everything he pens.

As a pianist, he’s immediately engaging, bouncing away maniacally in the midrange and occasionally decorating his songs with treble filigrees. In concert, he’s a dervish on the keys, his curly-haired head bouncing up and down above his instrument as he sings. “Make Out With Me,” his latest single, is bound to be an audience favorite. Certainly Hugo gets points for honesty, confessing to the girls what they already know — like so many great musicians before him, he’s singing to win their hearts. This autumn, the New York City-based pianist and rocker will be taking the song to the United Kingdom for a tour; don’t be surprised if the girls over there take the winning singer-songwriter up on his offer.

Hugo isn’t shy about showing his face in his clips. He’s been the star of all three, and he’s proven he’s awfully comfortable in front of the camera. There’s a common denominator in all of these rewatchable videos, too: Hugo as an unlikely romantic hero. In “Uncommon Courtesy,” he rocked with a band of stuffed animals while cartoon birds fluttered around his head; a princess under a construction-paper tree falls for him. In the remarkable clip for “Dear Walker,” he leaves his apartment to take flight in a cardboard rocket, donning a space suit (and playing a glowing, computerized piano) while his girl watches on television.

In the “Make Out With Me” video, we’re back in front of the red velvet backdrop again, playing on a small theater stage. Hugo himself is where he’s most comfortable — surrounded by fetching young women. Barefoot, they circle the singer (who wears a “trust me, I’m an organist” T-shirt), reaching out for him, kissing his face in time with the drums; they treat him like a rock star, and he acts accordingly. When the stage lights go up, they’re positively swooning, leaning on his piano, hanging on every word he sings. By mid-clip, they’re huddled with him beneath a multicolored parachute, each one begging for his attention. The lyric has had the desired effect.

We’re very excited to have the opportunity to promote this new clip for “Make Out With Me” and are here to hook you up with everything and anything Hugo related. Don’t be shy about reaching out. If you need more info, call Andy Gesner at 732-613-1779 or e-mail us at info@HIPVideoPromo.com.