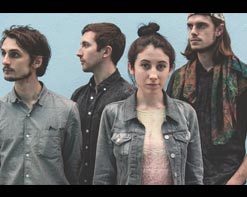 Hundred Waters’ ascent from their roots in Gainesville, Florida into an internationally acclaimed artist has been swift and well earned, due in large part to their full length effort, The Moon Rang Like A Bell. And while the inclusion of their song “Show Me In Love” in this years’ poignant Coca-Cola commercial that aired during the Super Bowl may seem like the high point for any indie band, it is merely the next step in a long journey of musical milestones that surely lie ahead. To celebrate the release of the remix version of The Moon Rang Like A Bell, they have treated us to a hauntingly beautiful rendition of “Show Me Love,” which showcases lead singer Nicole Miglis.

Supporting The Moon Rang Like A Bell has kept the band beyond busy, including headlining tours in both the US and Europe, as well as a spot supporting Interpol on the North American tour in 2014. They also performed a renowned set at the 2014 Pitchfork Music Festival. Not wanting to slow down, the band recently announced The Moon Rang Like A Bell (Remixed) featuring reworked versions of all 12 songs by artists like Dirty Beaches, Plaid, Illangelo, and more. And while we are all chomping at the bit to hear these new renditions, it is like going to be Hundred Waters themselves who steal the show with their fresh approach to “Show Me Love.”

The video for this acoustic rendition of “Show Me Love” is appropriately sparse and minimalist with a strong focus on Nicole and the mesmerizing lyrics. The setting is a quiet house, dimly lit in a subtle blue filter. At first we hear the city noises from the outside but once Nicole sets herself at the piano bench and begins playing, the rest of the world melts away into the background and there is only one voice that needs to be heard. The room itself is shrouded in soft white drapes which helps to accentuate the subtle changes in lighting throughout. This is all just creating a background for the real emphasis on Nicole as she becomes completely enveloped in the songs and we feel every strained vocal chord and deep breath as she delivers an absolutely masterful performance. The song abruptly ends and the sounds of the outside world return as the video slowly fades away.

We are once again honored to be a part of the Hundred Waters team to help continue to bring this band to an international audience. The band is embarking on a full US tour imminently, which begins with an appearance on The Late Show w/ David Letterman so we would love to talk all things Hundred Waters and hook you up with tickets to see them in your market. Please contact Andy Gesner and the HIP Video Promo crew at (732)-613-1779 or email us at info@HIPVideoPromo.com . You can also visit www.Facebook.com/hundredwaters/ for more info on Hundred Waters.

For info about Hundred Waters’ other videos, click HERE