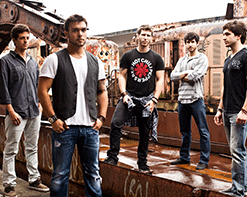 The natural need to rock. That was the sole reason behind Hunna’s birth in 2011. Formed by five young musicians from Rio de Janeiro – Magga (vocals), Fifo (guitar), Thiaguinho (guitar), Dov (bass) and Teo (drums) – the band mixes elements of classic rock bands such as U2 and Guns N’ Roses with brand new influences from Foo Fighters, Coldplay, John Mayer, Incubus and Kings of Leon. All pieces put together turn into a fresh and unique sound, never heard before from a Brazilian band.

Hunna’s songs were written based on everyday reality and personal experiences from the band members, disregarding any language barriers for either Portuguese or English. One song in particular jumps out in that regard, the delicately written, but hard-hitting song for “Rescue Me” which deals with losing the one true person you’ve loved like no other. The song occupies the spot somewhere between rock and roll and ballad, but much too articulate and nuanced to be considered a power ballad. Magga’s vocal delivery portrays a true sense of loss and remorse, and an honest introspection realizing that sometimes we only have ourselves to blame.

These moments can feel like they last a lifetime, so it’s only appropriate that the band chose to shot the video to portray that feeling. The effect is to shoot the video in double the speed and then slow it down to match the song, and the end result is a ghostly and mesmerizing clip. Full speed shots of the band performing are cut in, with the action taking place in a vintage homestead that sports big windows, checkerboard tiles and a nostalgic feel in its architecture. The blueish hues and lingering fog sets the mood as Magga can be seen reminiscing about those he has lost and let go and pleading with them to come back, to give him another shot, and to rescue him.

We’re very excited to be working with the Hunna crew to bring you this Brazilian band’s newest offering to the North American market. Please don’t be shy about getting in touch to get this into your programming, we’re always here. Please contact Andy Gesner and the HIP Video Promo staff at (732)-613-1779 or email us at info@HIPVideoPromo.com . You can also visit www.Facebook.com/hunnarock/ for more info. And make sure you buy the single here: https://itunes.apple.com/us/album/hunna/id723562724/!!