Hunt Sales Memorial “One Day” and “Angel of Darkness” 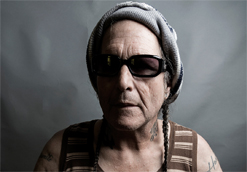 Hunt Sales is a survivor. Everything about him testifies to that: his eye patch, his tattooed arms, his no-nonsense demeanor, the gruff richness of his singing voice. Sales has survived life in showbiz – he’s the son of legendary comedian and actor Soupy Sales, and he’s been playing drums under the stage lights since he was a teenager. His list of collaborators is as impressive as it is varied. He played drums on Iggy Pop’s Lust For Life, Todd Rundgren’s Top 20 hit “We Gotta Get You A Woman”, and Los Super Seven’s Latin music collection Heard It On The X. He’s played with funkmaster Bootsy Collins, Americana pioneer Will Sexton, bluesman Lowell Fulson, and classic rocker Eric Clapton, and he was one of the founding members of Tin Machine, the experimental mid-‘80s quartet fronted by David Bowie.

He’s also survived his demons. For decades, Hunt Sales was a high-functioning addict. He’s not bragging about it – on the contrary – but he’s certainly done things that not many people live to talk about. Although Sales is now completely clean and dedicated to his music, his harrowing experiences have stayed with him. On Get Your Shit Together, his first solo album and his public debut as a songwriter and vocalist, the 68-year-old sings about hardship and loss, love and passion, addiction and perseverance, and pure rock and roll abandon with absolute candor and astonishing vigor. He’s made the album with co-producer Bruce Watson of Fat Possum Records. It’s a life story set to bruised, weary, but ultimately triumphant rock and roll, a testament to the singer and drummer’s hard-won wisdom, the proof of a fighter who won’t go down.

Today, it’s our pleasure to share two videos from Get Your Shit Together: the stinging, battered “One Day,” and the rollicking, pugnacious “Angel Of Darkness.” Hunt Sales is the star of both clips, and he cuts an impressive figure on camera. With his black hat, his eye patch, his braided hair, his gold-capped teeth, and his glowering expression, he’s no man you’d ever want to cross. In the “Angel” clip, his audience is a disaffected blonde seated in an empty room, and though he gives her the business, it’s clear she still holds the cards. The “One Day” video – which premiered on Billboard – is addressed to Sales’s late mother and father. It’s the lament of a man who has known struggle, loneliness, and pain, but who is determined to rise above it all.

Here at HIP Video Promo we’re profoundly honored to work with Hunt Sales and Bruce Watson at Big Legal Mess Records to share the new videos for “One Day” and “Angel Of Darkness.” Hunt Sales is a very special artist, so please let us know what we can do on our end to get these clips included in your regular programming and online presentations in a timely fashion. We’ll have plenty of Hunt Sales merch for you to set up contests or online giveaways, so please get in touch if you’d like us to send some your way. Please contact Andy Gesner and the HIP Video Promo staff at (732)-613-1779 or email us at info@HIPVideoPromo.cominfo@HIPVideoPromo.com. You can also check out www.facebook.com/TheHuntSalesMemorial for more info.