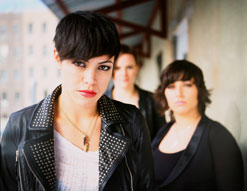 The three members of Hunter Valentine have been tearing up the club circuits on both sides of the U.S.-Canada border for the past few years. They’ve established themselves as electrifying concert attractions and rock stars in the making, and the upcoming Lessons From The Late Night looks certain to launch the trio into the stratosphere. And with her indie movie-poster good looks and ambiguous sexuality, frontwoman Kiyomi McCloskey might be the first real rock sex symbol of the newly-minted decade.

Now, any video director would love to have a subject like McCloskey to work with. But Taylor Cohen isn’t just any video director. Cohen’s outrageous clip for Matt & Kim’s “Lessons Learned” was perhaps the most talked-about pop clip of 2009 — and it won its creator the MTV Woodie Award for Breakthrough Video. The same kind of confrontational audacity is present in Cohen’s clip for “The Stalker”. True, Kiyomi McCloskey doesn’t take her clothes off the way Matt & Kim did, but then again, she doesn’t have to — she dominates every frame she graces.

The video is suitable accompaniment for a song as arresting as “The Stalker”. Here’s a statement of lust and obsession — and McCloskey delivers it with passion and conviction that occasionally spills over into brutal emotional honesty. Her band backs her up with rough-edged, two-fisted rock that owes as much to Joan Jett as it does to Sleater-Kinney. Producer Ian Blurton (well-known for his work with the Weakerthans and Skydiggers) puts the emphasis on the stinging six-string and rattling drums, and clears space for McCloskey’s astonishing vocals. It’s a legitimate approximation of Hunter Valentine’s rightly-lauded live show — right down to the charisma that radiates from every riff.

There’s plenty of footage of Hunter Valentine in action in Cohen’s clip for “The Stalker”, and in performance, bassist Adrienne Lloyd and drummer Laura Petracca are every bit as watchable as McCloskey is. When they play together, they’re an irresistible unit; they’re tight as a fist and just as dangerous. For a few menacing seconds, all three members of Hunter Valentine are shown wearing ski masks — it’s shocking, yet strangely appropriate. Taylor Cohen focuses on telling details: a laced-up boot keeping time, the cascade of Petracca’s hair as she hammers away at her snare, Kiyomi McCloskey’s bright red lipstick. Suggestive items hang from a hook on the wall of the practice area: a pearl necklace, a chain, a virgin-white dress, an empty coat hanger, a quarter-inch cable looped and turned into a noose. A microphone dangling from a wire becomes a sharp bullet; a broken-string guitar becomes a butcher’s knife. It’s all a perfect metaphor for the destabilization and danger that comes with runaway infatuation, and the young musicians in Hunter Valentine

It is our great pleasure to be working with the folks at Tommy Boy to bring you this hard hitting new clip. If you need more info, call Andy Gesner at 732-613-1779 or e-mail us at info@HIPVideoPromo.com.