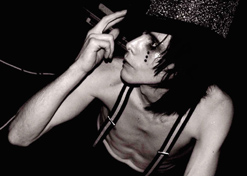 Hello music video loving friends, it’s Andy Gesner and the staff from HIP Video Promo bringing you another must-see clip! For more than a decade, Chris Corner has been treading the fine line between commercial pop and electronic experimentation. A tightrope-walk it surely is – but the synth auteur and explorer of the human unconscious has never once lost his balance. In the mid-Nineties, his hits with the Sneaker Pimps climbed the charts on both sides of the Atlantic; more recently, he’s relocated to decadent Berlin and released dark, personal electropop albums under the name IAMX (a play, perhaps, on Becoming X, the title of the Sneaker Pimps bestseller?). The IAMX singles have been as irresistible as the Pimps’s were – and the album tracks have been every bit as challenging, suggestive, synth-warped, and dramatic.

And Corner is no studio recluse, either. IAMX doubles as a ferocious live synthrock band that has featured members of Nemo and Robots In Disguise. Corner is an acrobatic and energetic frontman with a taste for provocative costuming, and his commanding stage presence – amplified by his outrageous makeup and accessories – has become a thing of legend among fans of ambitious electropop. In his characteristic top hat and black spangles, the IAMX singer cuts an unforgettable figure; this has, as you’d imagine, made him a natural for music video. His subject matter, too, is well-suited for video clips: Corner sings about alternative sexuality, mortality, obsession, chemical dependence, fashion, and lust. Notably, Corner shot two equally provocative clips for “Missile”, the lead single from the IAMX debut; in the first, he lay naked in a bathtub, head submerged, with the words “help me” taped over his lips; in the second, Sue Denim of Robots In Disguise sexually dominates him and forces him to ingest a possibly fatal pill.

The Alternative, the most recent IAMX release, is similarly edgy and compelling. It’s also been popular in Europe for more than a year, spawning several hit club singles – including the bracing “Spit It Out”. Here, Corner marries a dark tale of sexual compulsion and pain to the sweetest melody he’s ever written, and just to push the perversity even further, he croons it all in a butter-smooth voice. “If you like it violent”, he purrs to his lover, “we can play rough and tumble”.

Sue Denim returns to play the girlfriend in Hans Hmmers, Jr.’s combustible clip for “Spit It Out”; her hair and makeup is only slightly less eye-catching than Corner’s is. But the IAMX frontman is the star of this show, as he dances atop the crumbling staircase of a Berlin mansion that has fallen into ruin. Graffiti stains the steps, the doors, and the rooms of the building, and shafts of sunlight slash through holes in the walls and ceiling. Corner sings much of the song straight to his partner – but in other shots, he’s in front of the mirror, addressing his come-ons to himself. Images of the winsome Denim are rapidly replaced by others of Corner’s own face; in one memorable shot, his own head slides up to eclipse hers. Is she simply a substitution for his own destructive desires?; might this entire fantasy be purely auto-erotic?

It is our great pleasure to work in tandem with Dave Heckman and the crew at Metrolpolis Records to bring you this dynamic new video. They’ve been kind enough to hook us up with plenty of copies of The Alternative for your on-air giveaway needs, so let us know if you’d like to get your hands on some copies. If you need more info, call Andy Gesner at 732-613-1779 or e-mail us at info@HIPVideoPromo.com. You can also visit www.Metropolis-Records.com to find out more about IAMX.