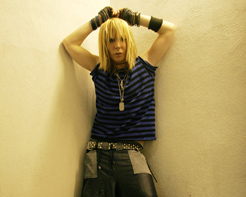 What’s up fellow rock and roll lovers? It’s Andy Gesner and the staff from HIP Video Promo, here with a new clip from a star in the making who’s built a career around a refusal to conform. If that sounds like an unusual trait for a pop singer to have, rest assured that Ian Erix is no usual pop singer. He turned down lucrative offers to join boy bands because he wouldn’t relinquish creative control over his music or his image. Even as a nascent musician living on Long Island, Erix had his own vision of a pop-punk-rythmic-heavy rock hybrid – and he’d already cultivated an outrageous, direct, and provocative personal style.

As often happens, the Europeans picked up on it first. Erix settled briefly in Denmark, where he met his collaborator and writing partner Dan Zak. The two penned songs that presented the young American as an entertainer first and a genre practitioner only after that: a modern pop individualist, a courageous trailblazer, and a good guy to have at a wild party. Approachable, identifiable, and engaging, Erix is a natural in front of a camera, and before long, European television executives tapped him to appear on a reality program following the activities of a North American making his way through the Old World’s music industry. International touring followed – Erix brought his energetic act to Western and Southern Europe, Japan, and South Africa, and cultivated a level of musical hysteria that crossed borders freely. All this activity culminated in the global success of the “Confessions Of A Killer” and “For Conformity” singles, both of which charted in three different continents.

Ian Erix isn’t exactly unknown in America – he’s no stranger to the gossip pages, and his name has been linked to some major media figures and reality TV stars – but he’s yet to replicate his overseas success in his native country. “Magdalen”, his latest single, ought to correct that imbalance. It’s the heaviest thing he’s yet recorded, filled with slashing guitar, gigantic kick drum, and brash, shouted vocals. This is radio pop a la Van Halen; confidently aggressive and roughly melodic. Keeping in character, his move on the American market is going to be a powerful one.

The notorious Erix presentation sense has delighted audiences around the world: with his signature tee-shirts, sunglasses, super wide leg jeans, platform sandals, and long blonde hair framing an equine face, he looks the part of a swashbuckling punk rocker. He’s even designed himself a logo that’s a bit of a takeoff of the straightedge insignia – his initials on either side of a roughly-scrawled red X! The “Magdalen” video takes no prisoners: it’s shot in a Thailand sex club, and the singer cavorts with some gorgeous pole dancers. But these girls aren’t exactly well-behaved. As Erix sings about the price of sin, they giggle, eat bugs, and divest a middle-aged client of one of his kidneys. The American pop star isn’t immune to their charms, either: before long, he’s wrapped up in Saran and sent spinning. Still, dangerous as this scene may seem, it’s presented as a good time – Erix is plainly pleased to be here, and the sex workers here have his grudging sympathy. It’s a trip on the edge – and that’s territory that Ian Erix is used to stalking.

Huge thanks are due to Bill Hastings and the crew at the Nordican Music Group for giving us this awesome opportunity! We are pumped about this video and hope that you will throw your full support behind this incredibly deserving artist. If you need more info, call Andy Gesner at 732-613-1779 or e-mail us at  info@HIPVideoPromo.com .