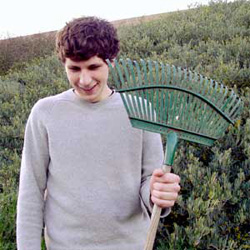 Greetings to all of my video programming friends! It’s Andy Gesner and the staff checking in with another incredibly cool indie rock clip from an artist you should be hearing much more about. Here at HIP Video Promo we are very fond of Arthur “Ace” Enders – a feeling which should come as no surprise to anybody who has followed the career of this young singer and songwriter. It’s probably impossible not to be fond of Ace; he’s greatly endearing, and he’s been charming audiences ever since he first picked up that acoustic guitar. In his work with The Early November and I Can Make A Mess Like Nobody’s Business, he’s recorded songs as instantly winning as his personality. They’re emotionally honest slices of life from a budding underground hero with the voice of an Everyman and the easy charm of a star.

Enders started singing to share his plaintive, straightforward stories with his friends. But after The Early November caught the ear of Richard and Stefanie Reines from the now-legendary Drive-Thru Records, the Hammonton, New Jersey native became a major figure in the emo-acoustic underground. The four-piece wowed audiences on the Drive-Thru stage at the Warped Tour, and placed their songs atop the MP3.com charts. Room’s Too Cold, the debut album, was one of the best loved acoustic-rock albums of 2003, and established Enders as a reliably moving songwriting force.

I Can Make A Mess Like Nobody’s Business is the logical next step in Enders’ artistic progression. Room’s Too Cold was more stylistically and instrumentally varied than most modern acoustic-rock, and The Early November was always pushing against arrangement boundaries and expectations. Here, Enders takes it further, incorporating a full string section, slide guitar, and even a little beatbox into an irresistibly catchy set of songs. The experimental arrangements are always tasteful, and never upset the intimacy and rapport he establishes with the audience – they’re small detours, gentle bends in a road that leads from Enders’ voice straight to his listeners’ hearts.

“The Best Happiness Money Can Buy” is an acoustic rock song with a clap-hands verse. The lyrics are sad – the shadow of inevitable and oncoming materialism hangs over the narrator – but the tone is playful. The bass walks a country-fried pattern over the chords, and drummer (and co-producer) Chris Badami keeps things lively with a swinging beat that meshes perfectly with Enders’ loosely strummed guitar. But it’s the lead vocal – honey-warm and as direct and intimate as a best friend’s confession – that really sells the song.

Pax Franchot’s clip for “The Best Happiness Money Can Buy” matches the warmth and brightness of I Can Make A Mess Like Nobody’s Business. Shot in faded colors and presented like a Sixties television program or filmstrip, the video finds the band playing on the idyllic green grass of a country ranch. Purple desert mountains rise behind the group, and small dogs run circles around the band. Singing with a smile, Ace Enders seems at home in the California sunshine; relaxed and goofy-charming, leading his band with his easy charisma.

There’s interior footage, too. Here, the band is gathered around a poker table, wearing Stetsons, kicking back, yelling a little. It’s a friendly game, and these are friendly guys; Enders sings the lyrics to his pals conversationally, as if engaged in frank discussion. They ante up, and listen appreciatively – just like Enders’ fans, they’re won over, too

It’s long been a wish of ours at HIP Video Promo to work with Drive-Thru Records, and it’s the highlight of this young year that this wish has finally come true. Along with the top-notch crew at Drive-Thru, we are prepared to answer all questions and meet all needs where I Can Make A Mess is concerned. The label’s star has never been shining so brightly as it is now in 2005, with many new bands poised for the spotlight, including Halifax, Hidden In Plain View and Socratic. We have plenty of copies of the new CD and any programmer that adds the new “The Best Happiness Money Can Buy” video in the month of February will receive a cool Drive-Thru prize package of buttons, stickers and posters for on-air giveaways. If you want an interview while I Can Make A Mess are on tour, we will be thrilled to hook you up. If you need more info call Andy Gesner at 732-613-1779, or email info@HIPVideoPromo.com. You can also visit www.DriveThruRecords.com to find out more about I Can Make A Mess Like Nobody’s Business