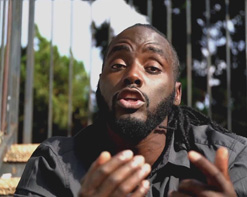 When a song connects with your soul, it becomes yours. It has the power to change your life, or even save it. It’s that powerful connection that Ignatius is making with the underprivileged youth of Pomona, California. As a kid, Ignatius was the second youngest of ten family members living under one roof and at one point a two bedroom apartment. Originally, it was him and his two older brothers in the Los Angeles area then they moved to San Diego where his mother and father took in his cousins from Uganda who’s parents had both died from aids. Ignatius had a very close bond with his father, a father that displayed extreme acts of violence that Ignatius would often witness at a tender age. Fast forward and his father left the family leaving a struggling single mother with ten children working all the jobs she could get, surviving off of welfare, food-stamps and a mountain sized faith, this forced Ignatius to do a lot of growing up himself.

As a young adult, he bounced around the LA area. He’d spent time sleeping on his brother’s couch in Compton when he got a minimum wage job offer in Pomona with youth. He started commuting to work from Compton to Pomona which meant 9 hours on a bus every day just to make ends meet. It was a very trying time in his life, a time where he was virtually homeless and often found himself crying aloud on the Compton streets of Long Beach Blvd and Greenleaf in late hours of the night. He would spend more time walking the streets and on the bus then at his actual destinations. Finally, he found an attic for rent in Pomona, where he moved to be closer to work. The job in Pomona and Pomona in itself was meant to be a pit stop but it became more..much more. Eventually, he and his wife saved enough money to get their own place. As soon as he physically could, Ignatius began helping others.

He and his wife opened Set Apart P-Town, a local youth group based in inner-city Pomona three years ago. After growing up the way that he did, it became Ignatius’ duty to help any kids going through similar hardships. Set Apart P-Town serves as a safe haven for those kids and has grown into a legitimate family. His new single, “All The Things” is his letter to the youth, spilling his heart onto the canvas for them to understand that they are not alone. With an eclectic list of influences ranging from classics like Boyz II Men, to modern hip hop, and even movie scores, Ignatius’ original sound articulates his deep message with incredible accessibility. The official video for “All The Things” serves as the perfect visual aid for the inspirational, well produced track. Not only is the footage straight out of Pomona’s inner city, but the Set Apart P-Town children are featured, tugging on the heart strings of any viewer and righteously hammering his timely message home. Just like Ignatius, these kids are impossible not to root for!