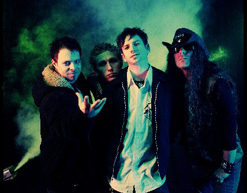 Greetings rock and roll lovers, it’s Andy Gesner and the staff from HIP Video Promo, here with a new clip from a Northwestern favorite just beginning to make their mark on a national stage. Beautiful Sandpoint, Idaho isn’t anywhere near any of the nation’s major metropolitan areas – in fact, it’s much closer to the Canadian border than it is to Boise. But favorite sons Illusion 33 have cultivated a sound big enough for any city. Two CDs in, they’ve already gone from local celebrities to regional stars. Trips to Seattle have established the quartet there, and the national release of the Words In Stereo EP seems certain to introduce Illusion 33’s infectious songs to audiences across the country.

The band has already been played on 68 stations across the country, and their relentless gigging schedule has taken them from coast to coast. They’re on the rise – and they’re doing it with talent, hooks, energy, and a broad and deep appreciation of rock history. The members of Illusion 33 love the classic hard rock of the Eighties and Nineties, and that’s reflected in the intensity of their performances and the sheer power of their sound. But they’ve got a taste for tuneful pop, too, and they can pen choruses immediate enough to compel concert crowds to sing along – even when they’re barely familiar with the band. (Indeed, Illusion 33 is a group that makes a memorable first impression). The result? A winning amalgam of commercial rock, edgy pop-punk, and bruising heavy metal, delivered by an entertaining frontman whose commitment is undeniable.

“Words In Stereo”, the title track of the EP, is a concert favorite and Illusion 33’s most undeniable cut yet. Formidable guitarist Bob Capka shows off two sides of the group’s personality, beginning the song with an acrobatic high-note weave and ushering in the singalong chorus with a crunchy, distortion-drenched chord. Bassist Jason Stoddard and drummer K.C. Carter lock in to a supple groove behind him; they’re rock steady, but flexible, too. Singer-guitarist Jesse Bennett sells it all with his powerful, emotionally-charged vocals, and as always, the band decorates the track with the arena-ready harmonies that have become an Illusion 33 trademark.

Director Patrick Brown-Hayes is without a doubt the most decorated filmmaker in Sandpoint – his video introduction to the town is now a much-viewed YouTube clip. He’s a fan of the band, and his enthusiasm for Illusion 33 is apparent in the “Words In Stereo” clip. The young director takes a documentary approach, capturing the excitement of a band trip to Seattle for a big gig. We’re shown the car trip, the approach of the city’s famous skyline, the screaming fans greeting the car at the club, the band hotel, and, of course, lots of footage of Illusion 33 in action, driving the crowd wild. Shot with the easy intimacy of a home movie, the “Words In Stereo” video provides a crisp introduction to a group poised to make noise in autumn 2008 and beyond.

It’s a big pleasure for us to have the opportunity to work with Spencer Andrews and the rest of the Dummy Boy Records crew. We’re all set up with copies of Words In Stereo for all of your on-air giveaway needs, so please drop us a line to get your hands on some. If you need more info, call Andy Gesner at 732-613-1779 or e-mail us at  info@HIPVideoPromo.com.