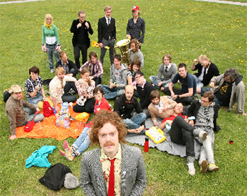 A warm hello to all of my programmer friends! It’s Andy Gesner and the staff at HIP Video Promo, hoping you’re having a rockin’ summer so far. It’s our pleasure to bring you the latest in a long line of super cool and inventive bands from Scandinavia – Sweden’s I’m From Barcelona, courtesy of our pals at Mute Records, who brought you fellow Swedes Mando Diao earlier this year. We’re convinced this new vid will bring a smile to your face and set your toes tapping.

Located at the southern tip of Sweden’s second-largest inland lake, Jönköping is recognized as one of the most beautiful cities in Scandinavia. Once a world leader in the production of matches, Jönköping is now better known for a different kind of fire: its crazy-creative youth culture. Singer and songwriter Emmanuel Lundgren lives in the midst of the action – and when he decided to form a group to commit his material to tape, he found that there was no shortage of talented locals willing to help out. Lundgren’s Jönköping flat became a laboratory and party-station, a place of exuberance, experimentation, and melody. And when Lundgren and friends were finished, they walked away with two remarkable things: a set of recordings that perfectly reflected the giddy conditions under which they were made, and a band that was 29 members strong. They called it I’m From Barcelona, and, naturally, within weeks of posting the material to a newly-created website, the group and its music became the talk of the Internet.

Lundgren and friends have never claimed to be from Spain; the bandname is a reference to Manuel, the hapless waiter from Fawlty Towers. But everything about this musical armada is bright and warm and Mediterranean – the melodies are expansive and infectious, the lyrics are rich with childlike wonder, and the singing of the choir reaches ecstatic heights. For a 29-piece band, I’m From Barcelona is remarkably disciplined and coherent – they’ve brought along their strings, horns, kazoos and percussion, but they’re judicious about all of their instrumental choices, and never overwhelm their tight pop songs with clutter. Also, as he proves on the instantly-winning (and appropriately-titled) Let Me Introduce My Friends, Emmanuel Lundgren is a surprisingly subtle vocal arranger. When all 29 members seem to be shouting the choruses in unison, it’s pretty transcendent; better still are those moments of call and response, multi-part harmony, and counterpoint. “Rather than superficial gestures of authenticity,” explains Marc Hogan of Pitchfork in a rave review of the album, “I’m From Barcelona’s cola-commercial chorale extends an invitation: One of these voices could be yours.

Lundgren and his band extend that generosity – and that friendliness – to their clip for the brilliantly-catchy “We’re From Barcelona”. Theirs is a video that seems to invite audience participation: we’re brought into to the band’s sunny sphere and asked to stay awhile. The clip opens high in the sky; the clouds part, and we’re shown an aerial map of the Catalan coast. From there, we soar toward a tower block – windows part, and there’s I’m From Barcelona in full, gathered on a three-step bleacher setup and swaying to the music. Each member is smiling widely and rocking from side to side with remarkable vigor, and they sing with unmistakable glee. Lundgren is here, too, and during his solo lines (not very much of the song, as most of “We’re From Barcelona” is sung en masse) he’s shot in front of a blue portrait-studio backdrop, skinny tie swaying in an artificial breeze. If this isn’t all playful enough, they’ve got some camera tricks up their sleeves, too. Members of the ensemble switch places from shot to shot, vanish and reappear, singing all the while. “You’ll be one of us!” they sing, and until the music stops, it feels altogether possible to join this merry crew – small wonder, then, that the clip has been viewed close to a half-million times on YouTube.

We’re absolutely thrilled to once again team up with Ellena Osis and the fine folks at Mute Records to bring you this infectiously joyous clip. We’ll have an ample supply of the Let Me Introduce My Friends CDs to meet all of your I’m From Barcelona needs, so drop a line if you’d like to get your hands on some. If you need more info, call Andy Gesner at 732-613-1779 or e-mail us at info@HIPVideoPromo.com. You can also visit www.Mute.com, or www.ImFromBarcelona.com to find out more about I’m From Barcelona.