Interpol “If You Really Love Nothing” 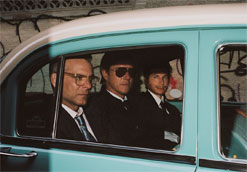 Interpol is back once again and ready to reveal the hidden treasures of their sixth studio album, Marauder. Locked and loaded with light production, heavy guitars and haunting vocals, New York’s own have left the perfect crime scene for their followers. These post-punk revivalists have no other plans but to rock out and to roll with wherever their vision takes them, evolving but never devaluing their original sound.

Interpol began over two decades ago in the heart of the Big Apple. Daniel Kessler (guitar), Paul Banks (vocals / guitar), and Sam Fogarino (drums / percussion) have been heavily influenced by The Strokes and Joy Division. In 2002 they released their debut album Turn On The Bright Lights; it was followed by a series of successful albums (2004’s Antics; 2007’s Our Love To Admire, which peaked at number four on the Billboard Hot 100 chart; 2010’s Interpol; and 2014’s El Pintor). Marauder has been a hit in the US and internationally, with Mexico City reigning as their #1 fan. Taking a trip into trance, this is one of Interpol’s most experimental and jarring works to date- but it comes at a cost.

For their latest music video, “If You Really Love Nothing”, Interpol dip their feet into temptation. Starring Kristen Stewart and Finn Wittrock, the video acts more like a short film. Director Hala Matar executes his vision with a leading lady complete with a short temper and hair that she probably cut herself. Turning the blade outward, she projects her feeling of emptiness onto others by manipulating multiple men for self-pleasure. Exchanging conversation and a smoke, her intentions get lost in translation as she suddenly slips away. The short scenes of the band is the only break the viewer gets from this impending chaos. Doomed by love and lust, the heartbreaker eventually gets caught, exposing her internal ugliness as her mask fades. Unable to face the consequences, she makes her getaway covered in a girl’s best friend- diamonds.

Here at HIP, it’s a true pleasure to be working with Interpol once again to promote their latest installment, the “If You Really Love Nothing” music video! We hope you embrace this clip as much as we have and consider including it in your regular programming and online presentations. Rest assured we’ll have plenty of Interpol merch available for on-air contests and giveaways so don’t hesitate to get in touch. For more information on Interpol, please contact Andy Gesner and the HIP Video Promo team at (732)-613-1779 or email us at info@HIPVideoPromo.com. For recent updates on Interpol check out www.Facebook.com/Interpol and www.Instagram.com/Interpol and visit www.InterpolNYC.com for more info.