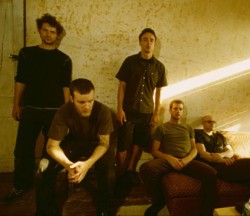 Hello my programming friends, it’s Andy Gesner and the staff here at HIP Video Promo HQ where the grayest days and longest nights of winter are upon us, and the dark, ominous, but strangely uplifting sound of Isis feels like an appropriate soundtrack. The grim, relentless, but oh-so-visionary five-piece has been turning heads all over the American musical underground for most of this still-young decade. Experimentalists love their propensity to play with song structure and sound. Indie-rockers dig their infrequently-discussed sense of harmony, their dense textures, and their stellar musicianship. Intellectuals appreciate the thoughtfulness of their lyrics, and the richness of their concepts. And metalheads worship at the altar of their awesome, thunderous power.

Although Isis has always been a defiantly underground band, their praises have recently been so widely-sung that they’re surfacing in spite of themselves. Revolver Magazine recently named Isis the best underground band of 2004, and devoted five pages to an analysis of their career and their latest album. Jon Pareles of the New York Times recently reviewed the band enthusiastically, citing their “deep fascination with sound and texture”. Selling out shows and showing up on top-ten lists, Isis stands as an inspiration to all artists who refuse to compromise their visions: proof positive that a band following a singular and relentlessly contemplative path with dedication can connect with a mass audience.

Albums as engrossing and well-considered as Panopticon are part of the reason. Taking its name from Jeremy Bentham’s eighteenth-century idea of a built structure in which every movement of the inhabitants could be tracked by an overseer,Panopticon uses Michel Foucault’s elaboration of the concept in Discipline and Punish as a supporting framework. For Bentham, the Panopticon was the ideal prison – a ring-shaped building in which a centrally-located guard could keep order simply through constant vigilance, thus obviating the need for more obviously oppressive punishments. But Foucault believed that the twentieth-century subject has fully internalized that relentless supervisor, and, knowing he is always being watched, he polices himself endlessly. From the Patriot Act to mundane video surveillance, the Panopticon surrounds us: and Isis is here to illuminate its reaches.

Knowing that you’re being watched tends to lead to paranoia, and “In Fiction” is a claustrophobic, frightening ride – the musical equivalent of looking over your shoulder during a trip down a dark hallway. Like many of Isis’s songs, it builds from an oceanic calm to a roaring climax with heavily-treated sheet-metal guitar. Throughout, frontman and ideologue Aaron Turner sings the disturbing lyrics in a low, throaty growl – whether he’s whispering menacingly or shouting to compete with the amplifiers, he sounds hunted, threatened, but always dangerous.

Directed by Josh Graham, the “In Fiction” clip literalizes the paranoia of the track. It’s subject is a young woman who finds herself watched – and then pursued – by a cadre of black-garbed, spectral humans. She flees from her observers into an abandoned factory (one well-outfitted with video cameras and television screens), but she can’t seem to shake them. They never touch or harass her: they just surround her, watching. Finally, finding the nerve center of the surveillance system, she collapses to the floor of the room and falls into a reverie. The black stalkers who chase her dissipate and become ethereal, filling the bleak chambers with fog and tentacles that reach toward the camera.

There’s nothing blurry about the clip – in fact, many of the images are sharp and hard – but the motion of the characters is choppy, unearthly, hallucinatory. The main character constantly seems to be dissolving: her movements are deliberate and discreet, and captured in a stop-action slow motion reminiscent of the “Enter Sandman” clip. Consequently, she feels weighted down, unable to get free; she is in one of those nightmares where she’s trying to move, but can’t fight her way free of the forces that pin her down. But as the clip shows, there is no waking from this dream, and no escape from the eyes of the supervisors.

It’s great to once again work with Rai Sandow and all the folks at Ipecac Recordings. If the amazing success and fun that we enjoyed with the Eagles of Death Metal promotion is any indication of Ipecac artists, I think we are all in for a real treat! We have copies of the Panopticon CD for on-air giveaways, so please don’t hesitate to get in touch. If you need more info call Andy Gesner at 732-613-1779, or email  info@HIPVideoPromo.com . You can also visit www.Ipecac.com, or the band’s websitewww.sgnl05.com to find out more about Isis.