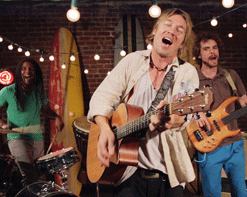 The J Band was formed by front man Jordan “J” Lindsey who describes his music as, “the music Bob Marley and Bob Dylan would make after taking tequila shots together.” So sit back and enjoy the ride as we introduce their fun-filled music video clip for an uproariously exciting single, “Coconut Mornings.”

It all began an acoustic open mic night, where The J Band formed their collective group of talent in 2009. The band’s trademark sound combines kick-heavy drums with acoustic guitars and eclectic instruments such as the ukulele and steel drums. Along with a unique sound, The J Band has an energetic live show which has translated into a high-spin rate on Pandora among other locations, all of which has earned them a dedicated following.

Their new single “Coconut Mornings” was originally recorded as an acoustic song and was exclusive for fans that bought the pre-release of the new album To The Last Drop, but the band knew it was destined for something bigger. “I love this new single,” says J, “because it’s all about coming home.” For J that meant coming home to the sounds and ideas that first captured him as a songwriter. The rhythm and theme of reflection pour through the single’s clip.

“Coconut Mornings” is a video that translates the passion and ideals of The J Band. Scenes are rich with energy and live performances by the band itself. As you watch the clip and more and more old friends and acquaintances join in the fun, viewers cannot help but to feel included in the partaking of the celebration of life that occurs during every moment. “Coconut Mornings” captures the importance of home and the quality of an all-around good time.

Blending folk and reggae styles, The J Band creates a unique style of music that transcends contemporary music. For more information on this fantastic band, please contact Andy Gesner and the HIP Video Promo staff at (732)-613-1779 or email us at info@HIPVideoPromo.com . You can also visit www.TheJBand.com/ for more info.