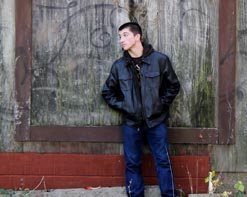 Long Island, New York’s Jacob McCarthy may still be a sophomore in high school, but he has been flexing his musical muscle for over a decade. The product of singer-songwriter parents who could sense his passion for music from the beginning, Jacob began singing at the age of four and should regularly find himself immersed in talent and variety shows. Once he caught the bug for performing he began to write his own songs, inspired from his vast library of music ranging from Simon and Garfunkel, Paul McCartney, Billy Joel, Eminem, Hopsin and so many more. He is a versatile vocalist with tone and natural range with the ability to hear pitch perfect.

With this kind of pedigree and dedication it’s only expected that McCarthy would approach music with a maturity that even the most seasoned performer would envy. Take his new single “One Gun,” for example. Most people would not expect an artist still in his teens to have so much to say about the trials and tribulations of falling, and staying, in love. The opening line hits hard and serves notice that Jacob means every word; “It only takes one gun to end my life but for you I would sacrifice.” His pain is real as he sings about a forbidden love that he feels determined to make his own, despite the odds.

The video itself is an understated accompaniment that compliments the minimalist production of the song with a graceful touch. To truly translate the depth of the music McCarthy elected to film only himself on a dimly lit stage, first on the bench of the piano and then stepping out into the spotlight at the front of the stage. There are no fancy tricks or games needed to bring home the connection between Jacob and his audience, just a young man and his voice. He brings the lights up at the end to reveal an empty amphitheater, proving that he is singing this song not for the praise of the many, but for the affection of one.

We are incredibly pleased to help expose this tuneful and tenacious new artist to a wide variety of names and faces. You can be certain that your viewers will latch onto this video just like all of us have. Please contact Andy Gesner and the HIP Video Promo crew at (732)-613-1779 or email us at info@HIPVideoPromo.com for more info on Jacob McCarthy.