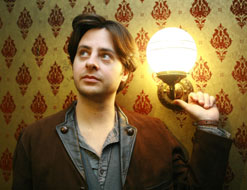 Hey, everybody, it’s Andy Gesner and the HIP Video Promo crew, here to help spread the word about a remarkable musician whose work you’ve probably encountered without knowing it. James Huggins — better known as James Husband — has been a linchpin of the Athens, Georgia indiepop scene for more than a decade. He co-founded Great Lakes, gigged with the Ladybug Transistor and the Essex Green, and collaborated with just about everyone affiliated with the Elephant 6 collective. Most notably, since the late Nineties, Husband has been Kevin Barnes’s right-hand man, and has had much to do with of Montreal’s ascendancy to international recognition. Since joining the group, he’s played on of Montreal’s heralded albums, singles, and EPs, and toured the world with the band’s incendiary and theatrical show. His enthusiasm, musical intelligence, and understated charisma has made James Husband a particular favorite among the members of of Montreal’s rabid fanbase: a friendly constant amidst the onstage kaleidoscope.

Fans of Barnes’s popular outfit (and by now, aren’t we all?) will find much to love about A Parallax I, James Husband’s multifaceted, engrossing debut album. The melodies sparkle, the tempos shift, the guitars seesaw, sting, and jangle, the synthesizers whir, and the crisply-written lyrics intrigue. of Montreal alumna Dottie Alexander appears on the set, as does Scandinavian siren Jenny Wilson — but this is James Husband’s show, and along with engineer and fellow Athens luminary Andy LeMaster (Now It’s Overhead) he’s made a recording that rewards close engagement. His pop is pure and psychedelic, and he isn’t afraid to tackle serious topics: the lovely “Greyscale” addresses feelings of alienation and loss, and “A Grave In The Gravel” takes a frank look at death and its aftermath for those left behind. “Window”, the lead single, is a sunnier affair, but no less thoughtful — and Husband’s singing is, as always, warm, approachable and instantly familiar.

Considerable touring experience has paid dividends for Husband — he’s put together a killer band to support A Parallax I, and their high-profile showcases at this year’s CMJ festival left New York City abuzz. Without skipping a beat, Husband led his group south; they’ll be on the road for the balance of 2009. If you can’t catch the band in your city, the clip for “Window” is the next best thing — it’s got much of the charm and whimsy of James Husband’s performances. Shot in what appears to be a suburban backyard — perhaps Husband’s own — the “Window” video takes a cheeky glance at the process of “assembling” a band. The multi-instrumentalist (wearing a matching red-striped shirt and socks combination!) drags a drumkit, guitar, and electric piano in front of the camera; not content with that, he also drags out two young women to play the instruments (not just any two girls though, Orenda and Maria from Azure Ray!). They’re as inert as anything else in the garden, and they require some serious coaching: Husband wags the arms of one to get her started behind the drumkit, and manipulates the mouth of another to generate some backing vocals. By the end of the clip, they’re capable of dancing, albeit robotically — Husband’s tutelage has shocked them into life!

We’re excited to bring you yet another winning video from our pals at Polyvinyl Records! If you need more info, call Andy Gesner at 732-613-1779 or e-mail us at  info@HIPVideoPromo.com . You can also visit www.PolyvinylRecords.com to find out more about James Husband.