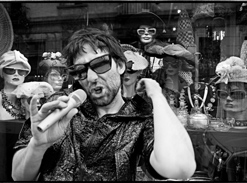 Hello friends, it’s Andy Gesner and the staff from HIP Video Promo, here today with one of the strangest and most beguiling videos we’ve come across in a long time. At first blush, Jamie Lidell doesn’t seem like an iconoclast: his brash, confident electro-R&B sounds as chart-friendly as anything this side of Maroon 5. But dig a little deeper, and you’ll discover a truly unusual artist – a digital snake-charmer talented enough to coax the soul out of the cold machine. Jim, his latest set, is, as the title suggests, a personal work for the talented producer-singer – it’s fresh, organic, kinetic, and crammed with incipient summertime hits. Think of it as this year’s answer to Feist’sThe Reminder: a collection of pop explorations from an offbeat indie songwriter that nevertheless connects with a mass audience

Electronica fans on both sides of the Atlantic know Lidell as one half of Super_Collider, an experimental dance-music duo responsible for some of the cleverest IDM (and mash-ups) of the late Nineties. Airplay on Gray’s Anatomy – and inclusion in the second iteration of the show’s celebrated soundtrack – has familiarized American audiences with Lidell’s solo work. Multiply, his 2005 release, introduced Lidell’s skewed electro-soul to a new generation of dancefloor explorers, and drew rave reviews from stateside critics. Calling the British singer “far more daring than Daniel Bedingfield or Craig David”, Robert Christgau goes on to report that Lidell “knows how to launch a falsetto, his beats… should not be played within earshot of anyone wearing a pacemaker”.

Jim has, if anything, been received even more enthusiastically. PopMatters called the album “an absolute pleasure to hear, from start to finish”; most tellingly, Vibe raved that the artist “makes retro sound futuristic, without changing a note”. The magnificent “Another Day” is a perfect example of what the urban glossy is talking about. Here’s a bouncy piano number that sounds like it could have been exhumed from Motown’s vaults – yet there’s something undefinable about the mix that stamps it as irrefutably modern.

Perhaps it’s Lidell’s own electrifying soul shout that makes “Another Day” feel timeless. Lidell has a voice that oozes personality and enthusiasm; here, his radiant performance brightens every corner of the track and propels the song forward. On camera, Lidell is charming and scruffily personable, too. Director Timothy Saccenti specializes in augmenting the personalities of leftfield R&B performers – he shot the arty, gender-bending “Downtown” clip for Peaches, as well as the award winning Animal Collective “Peacebone” and Battles “Atlas” videos – and with “Another Day”, he’s come up with another bizarre winner.

The “Another Day” video opens with Lidell shot from above, reclining on an array of parcel-sized light boxes. Once he’s up and singing, the camera pulls back to reveal where he is: in an alley between two warehouses in a grim-looking industrial district. Two mimes dance on either side of him – they arrange the boxes into a path for the singer to step on (the visual reference to the “Billy Jean” video is savvy, and wholly intended). As he journeys through the back street, he encounters three strange girls – one missing a mouth, one missing ears, and another without eyes. Jamie Lidell has an answer for each, producing an array of facial features from his pockets and fitting them to each young woman. Healed, they spring up and join the mimes in dance – and by the end of the clip, they’re gyrating in a circle around the Cambridge singer, who croons away with a chain-link fence and an electricity generator in the background. The contrast between the fantastic happenings in the clip and the grim, quotidian setting echoes the play of old and new elements in Lidell’s visionary music. Just as in the rightly-praised “1, 2, 3, 4” video, the choreography is warmly human, theatrical, and spontaneous: real enthusiasm from genuine people, moved to rapture by an irresistible song.

Many thanks to Priya Dewan and the folks at Warp Records for bringing us on board to be a part of the Jamie Lidell team! They’ve hooked us up with copies of Jim for your on-air giveaway needs, so hit us up if you’d like to get some. Jamie Lidell will also be touring the US from late May through mid-June, so let us know if you’d like to catch up for a video interview when he is in your market. If you need more info, call Andy Gesner at 732-613-1779 or e-mail us at info@HIPVideoPromo.com .