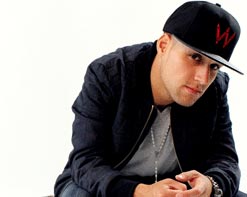 Jamieson is a London-born producer and songwriter who has been described as a storyteller narrating his life experiences through the art of music. This artist’s concepts come to life through a combination of catchy melodies, clever punch lines, and ingenious imagery. HIP Video Promo is pleased to introduce his newest clip for the track “Nothing To Lose.”

He believed that his success in the UK would be a mere starting point, and after years of hard work on the regional music circuit, he soon realized where his dream resided—New York City. Using his Colombian and Scottish heritage as inspiration, he became determined to make a name for himself as a musician and artist in the big, bad city. Once Jamieson became more familiar with his new environment, he began to document his experiences musically and as a result, he created countless numbers of expressive musical creations.

The Foreign Exchange mix-tape, hosted by G-Unit’s DJ Whoo Kid, was released in 2007, making Jamieson the first UK artist to have his own G-Unit Radio branded product. Between 2010 and 2012, he released a trilogy of EPs entitled I Came, I Saw. The positive feedback for these released has continued throughout the years, presenting Jamieson live performance opportunities at SXSW in 2013, Think Pink Rocks, Hot 97’s Who’s Next Music Showcase, and has even performed with artists such as Flo Rida, Sean Kingston, and Mobb Deep.

Director Bryce Prevatte takes the Vintage produced track “Nothing To Lose” to a whole new level in this exciting clip. Filled with wit and humor, Jamieson displays his own character-driven style through scenes of enigmatic entertainment. Jamieson’s unique form of storytelling is captured in this tell-all and invites viewers into the captivating realm of this captivating artist. “Nothing To Lose” introduces Jamieson’s eccentricity and takes contemporary hip-hop to a whole new level.

With an upcoming EP on its way, Jamieson is gearing up to excite and mesmerize fans of every music genre. “Nothing To Lose” is a track that entertains and leaves you in high spirits as the bold energy of the clip translates itself into its own brand of hip-hop music. For more information on this exciting new artist, please contact Andy Gesner and the HIP Video Promo staff at (732)-613-1779 or email us at info@HIPVideoPromo.com . You can also visit www.JamiesonMusic.com for more info.