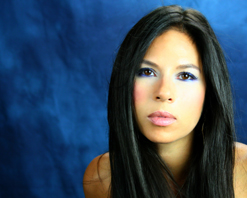 Salutations programming friends, it’s Andy Gesner and the crew from HIP Video Promo, here to share an inspiring clip from a most unusual source. Perhaps no song is as closely associated with the civil rights movement as Sam Cooke’s courageous “A Change Is Gonna Come”. It was the first (and some say still the greatest) piece of protest-soul; without it, Marvin Gaye’s “What’s Going On” and Stevie Wonder’sInnervisions are inconceivable. Since 1964, scores of legendary pop singers have recorded their own versions of the classic, politically-conscious rappers have sampled it, and filmmakers have featured it in the final scenes of too many motion pictures to name. The song is timeless, inexhaustible, and perpetually relevant. In the wake of Barack Obama’s victory in the November elections, it has often been sung to demonstrate how far we’ve come. But that’s not why Jana Mashonee sings “A Change Is Gonna Come”; not exactly. Her incendiary version is a message of hope and defiance, too – but it’s also meant to remind us all of how far there is to go.

The talented and glamorous Mashonee is Native American: part Lumbee, part Tuscarora. And while she can croon an R&B ballad with the authority of any contemporary hitmaker, she has always written and sung passionately about her roots. American Indian Story, her 2006 full-length, is a thoughtfully-written and strikingly-performed song cycle about the Native American experience. The album was nominated for a Grammy Award, won several NAMMYs (Native American Music Awards), and established the young Mashonee as a legitimate spokeswoman for a segment of our national mosaic that has too often been overlooked.

New Moon Born, her latest set, feels at once more personal and more universal. The songs are radio-ready, the production glitters, and the style is thoroughly current; Mashonee sings contemporary R&B with conviction and authority. Her electrifying interpretation of “A Change Is Gonna Come” demonstrates exactly how much wattage she can bring to a ballad. Juno Award-winning guitarist Derek Miller – also born on a Native American reservation – decorates the track with his gorgeous, soaring Telecaster leads. The duo performed the song at the Native American Presidential Inaugural Ball – and by all reports, they levitated the building.

Mashonee is an activist as well as a performer; her nonprofit “Jana’s Kids” scholarship program has helped fund the education of talented Native American children. Consciousness-raising continues in the moving clip for “A Change Is Gonna Come”: here, we’re taken to places that few non-Native Americans ever visit. Mashonee shows us still shots of children on reservations: some of the photographs are ancient, some are current, but all are profoundly moving. The hope in the eyes of these kids is apparent – but so is the pain. In the clip’s most arresting shots, Jana Mashonee is shown singing alongside these photographs. She’s the living embodiment of the change she wants so desperately to see, and to make available to the children she shows us: a voice for the voiceless, and a new destiny for a proud people that has known hardship and struggle.

We are very pleased to have the pleasure of working with Stephan Galfas and Miss Molly Records to bring you this stunning new clip. They’ve also hooked us up with plenty of copies of New Moon Born and we’d love to get some in your hands for on-air giveaways, so be in touch! If you need more info, call Andy Gesner at 732-613-1779 or e-mail us at  info@HIPVideoPromo.com .