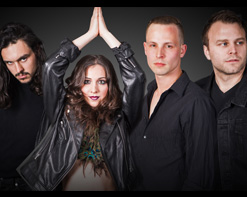 Tuneful and tenacious, Arizona’s top up and coming band is back! Anyone who knows Jane N’ The Jungle knows they are a powerhouse of diverse musical aesthetics, from singer Jordan White’s musical theater background to guitarist Brian Dellis’s years as a punk rocker. An intriguing mashup of disparate influences, this musical tsunami creates a sonic mosaic of indie/alt ear candy that set them up to be the next big thing to come out of The Grand Canyon State since Jimmy Eat World. It’s rare when a young band can build their reputation for their ferocious live sets, while continuing to release superbly constructed, surprisingly nuanced recordings.

With White’s passionate vocal stylings stronger than ever, the band is thrilled to return with a song and video that seems like a total 180 spin from their last critically acclaimed release “Faded Stars.” Jane N’ The Jungle has knocked it out of the park on this compelling new video with a toe curling, face melting, sinister ode to debauchery called “Killed Someone.”

Fans around the world have embraced their trademark, anthemic choruses that wash over the listener like a tidal wave, and it’s there in spades in “Killed Someone”. Possessed with fervent passion coming from the deepest, darkest chasms of her soul, Jordan White’s force of nature voice soars like a hawk looking for prey, and the bodacious, mind-blowing guitar solo, just like in “Fading Stars,” absolutely slays.

The bold new video for “Killed Someone” is memorable in every aspect. While the band rocks out at a seemingly tame party on the outskirts of Phoenix, a gritty, sweaty story on the criminal level is taking place simultaneously. The male protagonist, a scummy evildoer looking for a “good time”, preys intentionally on the most weak and vulnerable, and in this scenario the naive victim won’t likely fight back after the dirty deed is done.  A touch of mystery, a hint of suspense, and an overwhelming sense of dread permeates throughout “Killed Someone”. No way you can take your eyes off this one!

We’re simply blown away by this “killer” new video! It’s a pleasure to be working with the Jane N’ The Jungle team again, and here at HIP we hope you find yourself fully ensconced in the “Killed Someone” video as we did after just the first viewing! Please let us know what we can do to get this outstanding clip into your programming and know we have all kinds of JNTJ goodies for contests and giveaways!  For more information please contact Andy Gesner and the HIP Video Promo team at (732)-613-1779 or email us at info@HIPVideoPromo.com. You can also visit www.JaneNTheJungle.com for more info on Jane N’ The Jungle.