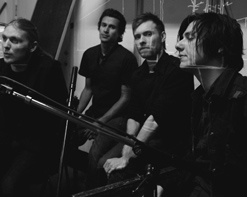 A hot and steamy hello to you! It’s Andy Gesner and all of the awesome staff here at HIP Video Promo, here with another superlative video from our friends in Scandinavia. January Jaunt hails from Aarhus, Denmark’s arty second city – and a trading town that has long been the crossroads for musical influences from Northern and Central Europe. The quartet’s music reflects this background: January Jaunt is a band that pulls from many traditions, including Krautrock, Continental electronica, dark art song, contemporary indie music, neo-psych, and classic prog. Singer Ole Gundahl’s lyrics (penned in English) are crammed with desire and apocalyptic imagery, and he is unafraid to make references to classic texts, and to cleverly employ near-revolutionary rhetoric to heighten the emotional tone of his songs.

But for all their experimentation and boundary-pushing, January Jaunt is a rock band – and a pretty damn ferocious one, too. Most of the songs on Echoes & Stills build to towering climaxes: “Love Of My Own Design” and “Plateau” begin as whispers, and culminate in torrents of guitar and piano. Gundahl’s voice – an instrument of remarkable expressive power – glides effortlessly over the top of the storm. His falsetto projects ambivalence and vulnerability, but when he needs to compete with the pounding drums and scalding guitars, he drops to a anguished wail that strikes with the force of a snare drum beat. Guitarist Stig Morek is a master of six-string effects processing, and on tracks like the stinging “Seeking With Eyes Closed”, he conjures a psychedelic symphony of reverb, distortion, and phasing. The quartet’s mesmerizing show have made January Jaunt one of the most popular draws on the Northern European club circuit, and this summer, they’ll be streaking through Denmark and Sweden and making new fans wherever they play.

Like many January Jaunt songs, “Try”, the lead single, begins with a simple piano pattern. But by the time Ole Gundahl begins to sing, the track has already combusted: it’s a swirl of hi-hat, glittering guitar, and high synthesizer. Surely it must be a hypnotic thing to encounter in a concert hall – and director Andres Steen Sørensen has captured some of that energy in his colorful performance clip. Sørensen, who has also shot clips for Mimas and Stanley K, has made a name as one of the more technically-gifted video directors in Denmark (he’s also a celebrated band photographer), and with the “Try” clip, he again demonstrates his interpretive skill. The group is shot in action, delivering their song with studied fury. Sørensen projects bars of blue light on Gundahl’s face and body – they streak across the darkness like reflections thrown between bars. As the camera slides from left to right, the flashing colored lights move too; restless, they flit from body to body, creating a sense of destabilization. Finally, a stage-light behind Gundahl breaks the reverie, exploding into rays of vibrant color. They stream over the singer’s shoulder, blooming as the song reaches its conclusion, and fading to gold-dust after that.

We’re so pumped at the chance to get to work with Steffen Rasmussen and his incredibly hard working staff all the way from across the Atlantic in the great country of Denmark. We have plenty of copies of Echoes & Stills on hand, so if you would like copies for on-air giveaways don’t be shy and let us know! If you need more info, call Andy Gesner at 732-613-1779 or e-mail us at  info@HIPVideoPromo.com .