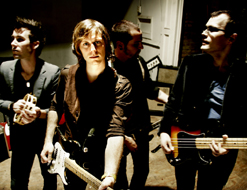 Hey, everybody, it’s Andy Gesner and the staff from HIP Video Promo, spreading the word about a multitalented entertainer/songwriter making waves onstage and on the small screen. In fact, you might already recognize Jared Scharff’s face as the current guitarist in the legendary Saturday Night Live band, where he has been rocking a nationwide audience weekly. As the latest six-string hero on SNL, Scharff takes his place in a long line of accomplished musicians who’ve starred in the SNL band, including Paul Shaffer, G.E Smith, and Lukasz “Dr. Luke” Gottwald (writer/producer of Britney Spears, Katy Perry, Kelly Clarkson, etc). It takes an artist of great skill and sensitivity to make the SNL band; Scharff’s inclusion is a testament to his rare talent. Scharff has also been an in-demand session player as well performing and recording with Justin Timberlake, Beyonce, Kid Rock, Mary J Blige, Rhianna, Fergie, Maroon 5, Debbie Harrie, etc. He has been a part of the CBSFashion Rocks TV performance, Pete Seeger 90th Bday Celebration at Madison Square Garden, and the Bill Withers Tribute concert. He’s also already captured the musician’s Holy Grail: profiles in Guitar Player and Premiere Guitar magazines.

So his own band is flashy; a vehicle for Scharff to showcase his chops, right? Actually, the Royals are a sharp, modern rock/pop band specializing in tightly-constructed, catchy pop recordings. Like Tom Petty & The Heartbreakers – an act that Scharff admires – the Royals place their sterling musicianship in the service of the song. Unlike many six-string heroes, Jared Scharff is as inclined to jangle and weave as he is to take a ripping solo (although he certainly can do that, too!), and everything he plays on the guitar supports his strong melodies. So as talented an instrumentalist as Scharff is, he has always made songwriting his principal priority – and if you don’t take our word for it, just ask Billboard Magazine, whose annual “World Song Contest” he’s won.

“Bedroom Eyes” is a perfect example of Scharff at his best. It’s a slice of Americana – a warm, welcoming folk-rock recording with a sugar-sweet, California sun-baked lead vocal by the songwriter. The Royals are every bit as quietly impressive; the perfect compliment to Scharff’s songwriting prowess and our bets are that you won’t hear a better-played pop song on the radio this year. Jared Scharff has been the number one most downloaded unsigned artist on Purevolume.com; tracks like “Bedroom Eyes” are why.

If the recorded version of “Bedroom Eyes” displays Scharff’s love for relaxed, assured folk-rock, The Brothers Rye (winners of the “No Sleep ‘Til Sundance” video award judged by the Beastie Boys for their song “Shake Your Rump.”) video for the song underscores the young guitarist’s association with Saturday Night Live. It’s a humorous clip; one featuring a fetching leading lady with villainous intent, and a slapstick performance by Scharff in the role of a beleaguered boyfriend. The Royals lead him to his girlfriend’s door; bashful and charming, he’s dressed for a date. When he’s pulled inside and chained to the bed, he’s understandably excited – but as it turns out, the temptress only wants to torture him! The following morning, he wakes to greater indignity: his bandmates have been similarly enslaved. The young woman sits on her sofa as they play for her; she grades their performance as she holds them all her prisoners. Escape from her suburban home is their only recourse – but how?

We’re thrilled to have the opportunity to work in tandem with Jared Scharff to bring you this incredible new video. If you need more info, call Andy Gesner at 732-613-1779 or e-mail us at info@HIPVideoPromo.com .