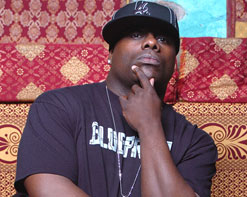 Greetings, programming friends! It’s Andy Gesner and the rest of the HIP Video Promo crew serving up a new video by a group you can’t quite categorize. At its core, The Jaystorm Project is a fusion of genres, heavy on the hip-hop and funk with traces of soul, R&B and rock. It’s some pretty irresistible music that will get you moving, just as showcased in the Jaystorm Project’s video for “Get Wit’ Cha.”

This video is simplicity at its best. There are no fancy lighting tricks or some complicated story being told; what you see is a straight-forward performance video that forces you to focus on The Jaystorm Project and their raw talent. A variety of girls surround the band, dancing and overall just vibing to the music in the dead of the night amidst an intimate venue. The high energy and crowd interaction that The Jaystorm Project is known for in their live performances transfers over to the video, thus you get an upfront view of what it’s like to watch this band at their most natural. Now, this is the kind of party you’d want to be at as the band and the crowd become one.

At the forefront of The Jaystorm Project is Jaystorm himself. In the “Get Wit’ Cha” clip, Jaystorm rap-sings effortlessly a la mainstream counterpart Drake. Jaystorm’s rhymes are on-point (if you listen closely, you’ll even hear him mixing up Lisa Stansfield’s “All Around The World”), and the rest of the Tennessean quintet plays an integral part in the song – from Glyn Loyd’s bass intro to guitarist Robert James Jr. owning the bridge. It’s a great change from where Jaystorm was six years ago when he started out as a solo act. Now, he’s got a team of well-trained musicians (a few of them have been in off-Broadway productions) who have become so much more than his backing band.

You can find “Get Wit’ Cha” off of The Jaystorm Project’s A Brand New Funk: The EP. The EP, released last year, features unlikely collaborations with singer/songwriter Dave Landeo and rapper Mr. Mack, but each brings out a different side of the band. You’ll hear pretty quickly that The Jaystorm Project’s influences are apparent in sound, merging the worlds of Parliament/Funkadelic, The Roots, Lenny Kravitz and RUN-D.M.C. with just a touch of Hendrix.

We’re very excited to be working with the Jaystorm Project in helping get their name out there. If you need more info, call Andy Gesner at 732-613-1779 or e-mail us at info@HIPVideoPromo.com. You can also visit www.Jaystorm.net and www.ReverbNation.com/JaystormProject to find out more about The Jaystorm Project.