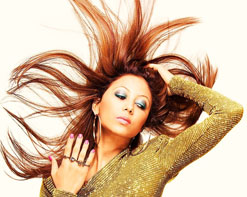 Hello fellow music lovers, it’s Andy Gesner and the HIP Video Promo staff. Today we’re very excited to introduce you to an Australian artist whose presence in the affectionately nicknamed The Sunburnt Country has propelled her onto an international trajectory. Adjectives like imaginative, adventurous, zealous and spiritual are characteristics that Jazlyn displayed from a very young age. Born and raised in Perth, Western Australia, she was quick to understand her vocal ability and began performing live shows all over Perth city, by the age of 18, had already performed all over the nation. Her independence was evident as she decided to move to over east to Sydney, leaving her university, family and friends behind to further her career in music.

She took the initiative to start her own record label, Revelation Records, in which she incorporated her business-orientated skills. Influenced by soul music and African-American gospel artists such as Deitrick Haddon, Lecrae and Yolanda Adams she began writing her own lyrical content. Jazlyn fuses R&B, soul, hip hop and rock in a unique blend portraying her love for diversity. Her spirituality shines strong through her music and is inevitably one of her most distinguished attributes. “Yea Though I Walk” is the first single released from the much anticipated album Yea Though I Walk, which is said to exhibit an energetic quality. Jazlyn, having her eyes set on an immense musical journey, is set to bring one of the most unique essences to the music industry.

With such a grand vision for her music we had high hopes for a music video on a grand scale and Jazyln has certainly delivered that! The video for “Yea Though I Walk” begins with Jazlyn assembling a small army of soldiers in the wilderness. It’s clear that this crew means business as they set off on their path with the constant reminder that they will fear no evil. The devil’s work is never far away and it’s only a matter of time before they find themselves in the middle of a heated battle between darkness and light, with massive dust storms and debris flying everywhere. Their faith remains strong and it’s not long before they regroup to escape their tortured environment. But before they go, Jazlyn is determined to leave a powerful keepsake behind that will withstand any test and will deliver an eternal light to the shadowed environment where it rests.

It is always a pleasure for us to have the opportunity to work with artists with a strong conviction and belief in their art. Jazlyn is an artist that we believe has realized her tremendous potential and we hope that you agree! We’re here to help with anything at all that will help get the “Yea Though I Walk” video into your programming, including copies of the new album, Yea Though I Walk. If you need more info contact Andy Gesner and the HIP Video Promo crew at (732)-613-1779 or email us at info@HIPVideoPromo.com .