The Jealous Sound “The Fold Out” 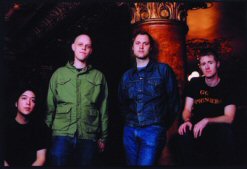 Hello my esteemed programming friends! It’s Andy Gesner and the staff from Hip Video Promo with another clip to get you excited. Over the past few years, we’ve enjoyed the privilege of promoting videos by some of the best-known acts in independent rock music. That’s been gratifying. But nothing pleases us more than calling your attention to videos by bands that deserve to be better-known. Such a group is The Jealous Sound, and we’re excited to assist them in taking their rightful place among the very finest bands on the independent circuit.

If you haven’t heard the Los Angeles-based quartet, yet, you’re missing one of catchiest, most adrenaline-fueled rock acts in the country. Formed by members of Knapsack, Jawbox, Sunday’s Best, and Shudder to Think – all charter members of Southern California’s punk-rock royalty – The Jealous Sound is urgent, guitar-driven, insistent, pregnant with meaning, musically accomplished and lyrically refined. Deliriously-received shows supporting Death Cab For Cutie, Foo Fighters, The Get-Up Kids and more have compelledSpin Magazine to call The Jealous Sound “the rock you must have” and Alternative Press to name them as one of their “Bands to Watch”.

Kill Them With Kindness, the group’s debut full-length, is a passionate, emotional document; a dark journey enlivened by nuanced crossrhythms, infectious melodies and frontman Blair Shehan’s clever wordplay. “The Fold-Out” catches the group in a more meditative state (albeit one that still manages to be more ferocious that most groups walking this territory): Shehan whispers and sneers over a rock-ribbed bass groove, sweeping synthesizer, and a firewall of incendiary guitar. It’s sexy, throbbing, a threat, a come-on – a warning charged with regret and the pain of experience.

The video for “The Fold-Out” is an artfully-shot performance clip directed by promising music video director Nate Weaver. He has spiked the vid with subtle, disquieting elements that give it an ethereal, tenuous aesthetic. The aperture of the camera opens and closes on items most associated with a living-room – telephones, a sofa, standing lamps. As darkness washes over each of these mundane household objects, they obtain a kind of ominous significance – distended, isolated from each other, they’re images in a kind of fragile, compromised communication. As the camera pans back to reveal the band, it’s impossible not to associate the furiously-strumming musicians with the objects we’ve just seen. Sidelit, glowering, they too take on a chilling, disconnected quality. Set up in the living room, they play with passion and fury as the lights swing in vicious arcs, probing the spaces between them.

For the first two verses of “The Fold-Out”, the viewer assimilates the shots to a domestic model: we think we’re in a living room. This could be a band-house, or a collective residence; the group has moved in amplifiers, and cables, and are performing to the drab backdrop of old sofas and drywalls. The video encourages us to suspend our disbelief, and view the performance as somehow natural. But at the bridge, the music shifts – the guitars and gigantic snare fade away, and a drum machine begins to clatter out a frenetic groove. As the group makes the craft behind their soundscapes apparent, the visual illusion shatters as well. The room becomes a gigantic lightbox – a distended soundstage, an indisputably alien, unnatural environment.

It’s this precise tension between the natural and unreal – the coldly synthetics and scalding passion – that makes The Jealous Sound an important new contributor in the rock story. The “Fold Out” clip is a visual representation of the questions that animate this unique and attention-worthy project. The band will be touring with Piebald from now till the end of the summer, so get in touch so you can be in the front row when they visit your market, or if you want to set up a video interview.

Thanks to our new pals David Brown and Paul Fischer at Better Looking Records, HIP Video Promo and The Jealous Sound give you the chance to become Better Looking! Any programmer that adds the cool new video from The Jealous Sound during the month of May will be entered into a drawing to win a HUGE Better Looking Records prize package including autographed CDs and totally rad t-shirts, plus CDs of many of the artists included in the Better Looking Records catalog. They include discs from No Knife and copies of a split CD featuring Cursive and Eastern Youth. For more info contact me at 732-613-1779 or e-mail info@HIPVideoPromo.com. The drawing takes place June 19th. As always you can check out www.BetterLookingRecords.com for info, and be sure to visit www.JealousSound.com for the latest and greatest!