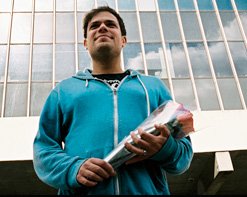 With their review for his new album, WORRY. (SideOneDummy Records), Pitchfork used the byline “In certain circles, Jeff Rosenstock is one of the most important figures in modern punk, and with WORRY., he has made his magnum opus.” Lofty praise? Indeed. But for someone with a resume like his, it quickly becomes apparent that his impact both on the stage and off has helped shape the modern American DIY punk scene.

His former groups, Bomb the Music Industry!, Kudrow, and The Arrogant Sons of Bitches helped revolutionize the “pay what you want” concept, and were fan-friendly by capping show fees and welcoming audience members onstage. It goes without saying that when he made the decision to strike out on his own that it was met with eager anticipation by fans and critics alike. With his new single for “Pash Rash,” Rosenstock has rewarded fans new and old with a blistering 105 second display of unabashed punk rock revelry.

While noting the deep diversity of sounds on WORRY., Pitchfork comments “there are flashes of Jawbreaker’s real-talk scene reportage, the synth-spiked sugar rushes of the Anniversary and the Get Up Kids, but also previously canonical touchstones that have become relegated to Boomerism nostalgia: the Beach Boys, the Clash, and Abbey Road.” No big surprises here, considering that beyond projects he’s fronted, he’s also stretched his palette playing with groups such as The Biscuits, The Simpsons, Bruce Lee Band, Laura Stevenson and the Cans, Andrew Jackson Jihad, Mustard Plug and Shinobu over the years.

The video for “Pash Rash” is the perfect clip to capture the energy behind a Jeff Rosenstock performance. Though we’ll never quite feel the same energy as the fans in the front row of this DIY venue, the subtle visual flourishes dropped in by directors Benjamin Epstein and David Combs show Jeff, his band, and the audience all passing through glitches in the matrix, so to speak, as the energy in the room overtakes them one by one. The video cuts to several shots of Jeff (repping his past tourmate Katie Ellen’s t shirt) banging away on the song solo, a telling juxtaposition that reinforces the fact that Jeff’s music is equally as engaging in any iteration.

We’re so thrilled to be leading off 2017 with some of the best of the best with Jeff Rosenstock and SideOneDummy! Jeff will be hitting the road this spring and we would absolutely love to get you out to see him live or hook you up with a copy of WORRY., so please get in touch! You can contact Andy Gesner and the HIP Video Promo team at (732)-613-1779, email us at info@HIPVideoPromo.com. You can also visit www.SideOneDummy.com or www.Facebook.com/JeffRosenstockMusic for more info on Jeff Rosenstock.