Jensen Reed “After The War” 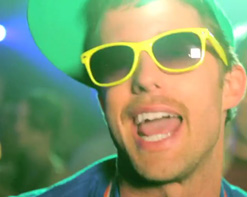 The stage lights are on, the crowd is wild, and the genre is changed forever. Programmers, it’s Andy Gesner and the HIP Video staff here with an LA gun who’s spitting rhymes at a thousand revolutions per minute and contaminating the hip hop genre with rock & roll and pop hooks. The hybrid alternative MC known as Jensen Reed is taking the city of stars by storm with his unstoppable new single “After The War (featuring superbeautiful).”

Jensen Reed got hooked on hip hop when his friend asked him for help in performing the Beastie Boys’ “Pass the Mic.” The crowd went nuts and Reed was forever bitten by the need to create and perform music. Since then Jensen has moved to Los Angeles and, in his short time there, already opened for Dilated Peoples and Little Brother, landed a publishing deal and had song placements in the lauded series Friday Night Lights, the Oscar-nominated film The Messenger and a number of MTV shows. He’s hooked up with revered music-video and film director Mark Pellington, who’s worked with Pearl Jam, U2 and the Foo Fighters, at Sundance, and now Pellington is using Reed’s songs in his latest film I Melt With You. Pellington protégé Matt Roe is helming videos for three tracks from Reed’s debut album Forget About The Cameras, starting with the dynamic “After The War (featuring superbeautiful).” Reed also gained YouTube notoriety when he spoofed Katy Perry’s “I Kissed a Girl” with a hilarious Duke basketball smackdown video that went viral, earning half a million hits. That got him an all-expenses-paid visit back home, courtesy of a Chapel Hill club owner who hired him to perform a couple of shows.

“After The War (featuring superbeautiful)” is a mashup of several styles, blending rhymes with rock style song structure and drum beats, dirty house synth, and massive pop hooks. Singer, producer, and DJ superbeautiful joins Reed to provide the catchy chorus vocal line, allowing the song to play a heavyweight role in all of the genres it dips into. The video finds Reed performing with an array of lights behind him, flashing urgency onto the viewers. Jensen Reed has the passion of rappers like Del The Homosapien and Eminem, but rocks the flashy clean cut heartthrob looks of Justin Timberlake, justifying his destiny for mainstream appeal.

We are thrilled to be representing an independent artist who is making things happen on his own terms and with his own working hands. We urge you to add this shiny feel good clip to your playlists this fall. We’ve also got copies of Forget About The Cameras here for your listening enjoyment and any giveaways, so reach out today! If you need more info, call Andy Gesner at 732-613-1779 or e-mail us at  info@HIPVideoPromo.com . You can also visit www.JensenReed.com to find out more about Jensen Reed and any show dates near you.