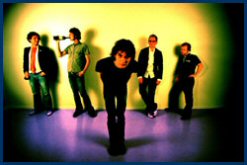 Hello everyone in music video land! It’s Andy Gesner and the staff from HIP Video Promo checking in with more great music and an awesome new video to get you in the mood for the cooler temperatures..2003 is coming to a close soon and it is a thrill for us here to be able to keep the new videos coming your way right through the end of November. In our ongoing quest to bring you top notch talent from all over the world (Jet/ Australia  – Blur/England – Peaches/Canada), our most recent offering comes to you from the land of the Midnight Sun, Norway. Yes…NORWAY.

When one thinks of Norway, the immediate thoughts are of frigid temperatures, winter sports, Sonya Hennie, fjords…Norway has never been notable for engaging independent rock, until now. The Jessica Fletchers (Rainbow Quartz) are instantly likable retro-rock rabble rousers residing in Oslo, Norway. Having fun and living the “rock and roll lifestyle,” this joyful, psychotropic quartet of grinning minstrels create music that breaks new ground while paying tribute to the foundations of rock and roll music. The band’s memorable moniker is being lumped into the “visceral, guitar-based garage rock brilliance” category (White Stripes, Strokes, Hives, Jet, etc.) by the fickle press…. huge champions of this exciting musical movement that has recently been making a much needed and welcome resurgence.

What can you say about a pop band from Norway named after the American TV version of Agatha Christie? Well, you can say that the nippy weather up there in Scandinavia seems to have perfectly preserved the sounds of sixties psychedelia, and these Norwegians have dug it up and are spreading the love around gleefully. The clip, “Bloody Seventies Love”, features Saturday morning cartoon/The Monkees-esque colorful animated backgrounds and a cheery performance. The vid is as irresistibly catchy as the song. (For those of you too young to remember, old folks used to actually buy music on those black vinyl disks with the big holes in the center.) With the groovy dancing girls in mini skirts and go-go boots, “Bloody Seventies Love” is a kinder, gentler version of The Exploding Plastic Inevitable, but with the party atmosphere staying intact throughout.

“Seventies” is a bit of a misnomer, though. The sound is pure 60s British-invasion style pop. It’s impossible to hear even the opening notes of this song and not think “Beatles.” Vocalist/Guitarist Thomas Innstoe even performs with a broad, Lennon-esque grin. One distinguishing factor, however, that sets The Jessica Fletchers apart from their ancestors and inspirations (and from a lot of other retro-rockers out there right now), is the music production. The sound is clean and the mix is seamless and flawless. They’re obviously enjoying themselves tremendously, but don’t let that mislead you, they also know exactly what they’re doing and they do it remarkably well.

Having toured with Swedish heavyweights The Hives, and American indie-psych-pop faves the Apples in Stereo, The Jessica Fletchers have a discernible buzz in the states with their critically acclaimed new record, What Happened to the?Trafficking in a lysergic blend of nonlinear jangle and harmony with splashes of very cool organ and keyboards, The Jessica Fletchers are an amalgam of such great as The Mamas and The Papas, The Kinks, XTC/Dukes of Stratosphere and Syd Barrett-era Pink Floyd. A sure hit with aging hipsters and indie rock intelligentsia alike, this is a new group to watch and we are proud to bring them to you.

Huge thanks to our very cool new friends Matt Smallwood and Jim McGarry at Rainbow Quartz Records, a label whose star is shining very brightly these days. The New York based indie upstart has quickly become internationally recognized as an arbiter of “garage/psychedelic/guitar pop” good taste, with artists residing from all over the globe, including Israel!