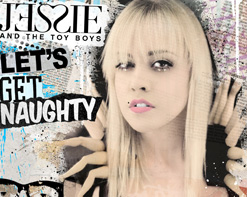 JESSIE AND THE TOY BOYS

Hello programming friends, it’s Andy Gesner and the HIP Video Promo Staff, pleased to introduce another extremely riveting video by HIP favorite Jessie and the Toy Boys. In a culture that produces sterile and overly accessible styles of pop music, it is hard to find an artist that exerts true passion. However, this talented singer/songwriter not only defines and creates her own musical style—she uses it to explain that she’s not just a bunch of flashy glitter and glue. The Southern California native, Jessie Malakouti, proves to be the best of the bunch; with her fists full of all types of goods, she throws an intense feeling of creativity at you in her new video, “Let’s Get Naughty.”

Along with being an extremely talented singer, Jessie is also a producer and a dancer. She has the charisma and energy to fill a room, and she’s proven it this summer when opening for Britney Spears and Nicki Minaj on the Femme Fatale Tour and the electronicIDentity Festival with the biggest names in the genre including Skrillex and Kaskade. Jessie started hitting the mainstream through appearances in a series of commercials and music videos. Known for living on the edge, she left her California hometown and moved to London, where her popularity exploded in the underground club scene. Since then, she has made herself extremely well known. Overtime she created a collection of various musical talents and has come to be known as Jessie and the Toy Boys. Her last single “Push It” featured rapper extraordinaire Yelawolf on the mic and received loads of mainstream attention including features in Life & Style, Rolling Stone, US Weekly, Music Connection, and numerous other tastemaker outlets. She has also performed the song on Late Night with Conan O’Brien. Interestingly enough, she has named her “band-mates” numerically, even if they are tall, dark, and handsome mannequins. But the level of intrigue does not end there, my friends…

The scorching new video for “Let’s Get Naughty” will not only trigger an undeniable amount of excitement within, but it will truly make you dance. The song is the leading track from her upcoming 2012 release This Is How Rumors Start. Filled with physical animation, black leather, and whips, “Let’s Get Naughty” tells the sexy story of nightlife dancers and graffiti artists, and shows a more raw and gritty version of the young star. The video was shot in the subways of Cleveland and the world famous Voyeur night club in West Hollywood. Jessie’s ongoing excitement follows you with bedroom eyes right up until the end of the song. Not only does it create a setting that allows you to let loose and live on the dark side, but also it gives a whole new meaning to the fun side of life itself. Jessie calls her music an “escape” and layers her every move with substance, something not seen often in pop/club culture.

The song itself is upbeat, yet it doesn’t adhere entirely to your typical pop song. With hints of dark and attractive percussion, the song entices you into a seductive void waiting to fill your desires, and the video just about sets the scene perfectly. Through her dance choreography, it is easy enough to see that Jessie is in full control and has polished her presence to rival today’s mega-stars. She comes at you from all directions, and it will make you eager to find out what she’ll do next. Jessie and the Toy Boys have yet to disappoint you, and will continue to amaze and intrigue every part of your being—even the parts you didn’t know you had!

Of course we’re thrilled to be working with Jessie and the Toy Boys once again, courtesy of our good friends over at Prospect Park. With that, we bring you this extraordinary video, and if you’d like a copy of the Let’s Get Naughty single, we ask you to contact us. If you need more info, call Andy Gesner and the HIP Video Promo crew at 732-613-1779, or e-mail us at info@HIPVideoPromo.com.

For info about Jessie and The Toy Boys’ previous video, “Push It” (Feat. Yelawolf) click HERE