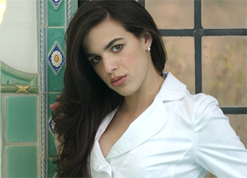 Garden State greetings! It’s Andy Gesner and the staff from HIP Video Promo coming at you with another captivating video. Here at HIP, we haven’t had that much opportunity to work with pure pop artists – but that doesn’t mean we don’t love the form, or that we can’t recognize a terrific new practitioner when we hear one. Jill Criscuolo is an eighteen-year-old singer from suburban New Jersey, but she’s got the kind of voice that’s liable to take her around the world. Thanks to her Internet popularity, her music is already known internationally, and she’s become a mainstay of online radio shows. ‘Net pop fans are among the most fickle and discriminating creatures in the web biosphere, and you can be sure that when they seize upon a new artist, she’s invariably one who’s got the goods. Crisciulo may be young, but she’s already captured their hearts; now, the sky’s the limit.

That’s probably because while her music is radio-ready, the West Orange native refuses to play it safe. Instead, she and her producers (the indie pop recording team GBLG Productions) incorporate elements of Eighties synthpop, electronica, trance, IDM, and mainstream rock into her tracks. Since she’s got such a terrific sense of time, she’s proven herself capable of riding any beat GBLG tosses her way – and her voice is supple and sinuous enough to wrap around the acrobatic melodies of her songs and squeeze every ounce of passion out of them.

“I’m Sorry” has the fresh feel of a debut, but it’s actually Criscuolo’s second single. Both of her releases have so far been quite different – as you might expect from a pop singer determined not to be pigeonholed. “My Life”, which received in-store play in Abercrombie & Fitch retail locations, was a pure, dizzy dance-floor stomper, while “I’m Sorry” is a powerful ballad that slows down the tempo long enough for the singer to savor every syllable – but the EP single release includes five additional mixes of the song, each with a different flavor. There’s a club mix, a dub, even an a cappella version; and the versatile Jill Criscuolo sounds completely at home in all of them.

The video clip for “I’m Sorry” is a deliciously soapy slice of marital dissolution, set in a gorgeous suburban manor. Jersey residents know the Pleasantdale Chateau as one of the state’s most prestigious wedding-event spaces and resorts, and Criscuolo makes the most of the glorious setting. Every shot shines with romance and vitality, and the young singer herself proves camera-friendly and genuinely emotive. She’s remembering a broken romance and a failed home, and each reflection is accompanied by an image of wedded bliss: a dinner out, a pillow fight, a swim in the pool. Each evaporates before her teary eyes as she sings about it, vanishing like images on the turning pages of a photo album.

We are really thrilled to be working with Fred Mills and all of the fine folks at Destined Fate Entertainment. We have enough copies of Jill’s new album I’m Sorry to go around for all of your on-air giveaway needs, so don’t wait one second to be in touch.  If you need more info, call Andy Gesner at 732-613-1779 or e-mail us at  info@HIPVideoPromo.com . You can also visitwww.JillCriscuolo.com to find out more about Jill Criscuolo.