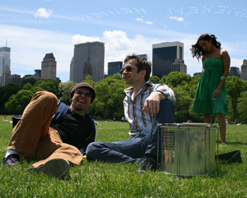 Summer greetings! It’s Andy Gesner and the staff from HIP Video Promo. The Cuban-born mojito has been the summertime drink of the last few years: tropical, trendy, tasty, celebrated by connoisseurs. Earlier this decade, few people outside of the major metropolitan areas had tasted one; now, they’re imbibed enthusiastically at high-class restaurants and corner bars alike. Something similar is happening to the caipirinha. This concoction of cachaça (a rum like spirit made from sugarcane), limes and sugar is quickly making its way onto the US scene. In fact, the caipirinha is the national drink of Brazil – and citizens of that country are both proud and protective of their favorite cocktail. To a Brazilian, the caipirinha represents summer, Carnivale season, relaxation, chilling out under the hot sun. It’s the spirit of a nation that straddles the equator, and one that Jinga Boogie summons to life in their infectious hot-weather single.

In theory, the Jinga Boogie duo is only half-Brazilian: pianist and singer Jamba was born in the South American nation, while percussionist Tom Armstrong hails from the United States. But Armstrong is a young master of South American rhythm, and his propulsive beats feel as authentic – and as intoxicating – as cachaça. Jinga Boogie’s samba is firmly in place; to this bedrock, the two musicians add elements of American rock, jazz, R&B, soul, and electronic music. “Caipirinha” is three dazzling minutes of percussion, piano, samba whistle, horns, Pandeiro, and electric bass and rock six-string. We’d be remiss if we didn’t mention the remarkable human beatboxing, too: Armstrong is one of those eclectic musicians who sees potential for percussion in everything, including the human voice. The whole song is held together by Jamba’s lightning-flash of a singing voice – he’s soulful, brash, confident, and just exotic enough to remind the listener that he’s venturing into unfamiliar and exciting territory.

The “Caipirinha” clip straddles continents, too: it’s shot in New York City, but it’s a Big Apple gone Brazilian. Capoiera dancers duke it out in the park as Jamba and Armstrong play traditional South American string and percussion instruments, and in the clubs, the stylish-looking bartenders are mixing up the cachaça and lime. The video opens in a sophisticated drinking establishment – the two members of Jinga Boogie stride into the bar and seat themselves in a deep leather booth. The bartender is Brazilian, gorgeous, and young, and when she comes to take the pair’s orders, the camera flashes to her name-tag. She’s called Caipirinha, too – the personification of the drink. Jamba tells the girl what he wants – the magic word, of course – and does so with flawless Brazilian pronunciation. It’s a sign between the two of them, an exchange of respect and recognition, and a celebration of pride and a shared heritage. And it’s sexy, too.

We are psyched to be working with Leblon Productions to champion the excellent new Jinga Boogie video. We also received a healthy supply of the single “Caipirinha” for all your on-air giveaway needs, so don’t hesitate to get in touch for your copy! If you need more info, call Andy Gesner at 732-613-1779 or e-mail us at  info@HIPVideoPromo.com . You can also visitwww.JingaBoogie.com to find out more about Jinga Boogie.