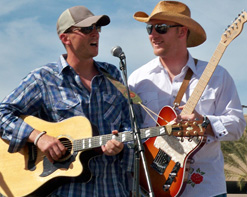 Programmers, picture yourselves situated miles from civilization as we know it, it’s a zillion degrees out, the nearest Starbucks is hundreds (if not thousands) of miles away, and your closest friends are a camouflaged humvee and an M-16. Now, what’s the one thing that can comfort you at this moment of infinite solidarity in unfamiliar territory – a cold beer, of course! It’s Andy Gesner here with the HIP Video staff, bringing you a gang of GIs who know the feeling described above and put forth a pressing message for the country. Take a listen at the feel-good effort from the Joe Speed Band titled “Cowboy Soldiers (Please Send Me A Beer).”

Two Laramie, Wyoming National Guardsmen – Spc. Jeremiah Eaton and Sgt. Nathan Harvey make up the Joe Speed Band. It was a boiling Christmas Eve in Iraq when these soldiers in the 133rd Engineer Company with the Wyoming National Guard decided to beat their blues by making some music. They were lonesome for home and starving for creativity, so they took a laptop, found a quiet corner in their tent and put together this vital signal into the internet space. “Cowboy Soldiers (Please Send Me A Beer)” is a twangy country party song about needing a beer on a hot day. However, on a closer listen, the song reveals the lyrics about living in a war zone and missing the good comforts of home sweet home. This is no ordinary country ditty, and these guys aren’t your average songwriters. This video features our heroic duo camped out in a military camp tent and in the middle of the Iraqi desert to perform the track with tons of self filmed Army footage, including shots of camels and military vehicles. The boys also acted out some humorous shots of empty beer cans filled with sand, to make for good television! The track has already resonated with support across the net, with features in Northern Broadcasting System, Billings Gazette, and on KTVQ TV and the Military Times.

The upbeat, feel good romp has also garnered the attention of national music powerhouse GI Jams, a music network dedicated to our GIs at home and around the world. Started by Denny Randell and Biddy Schippers, both hugely successful songwriters, Randell having penned hits including ‘Let’s Hang On’, ‘Working My Way Back To You’, ‘Native New Yorker’ and ‘Can’t Get Enough Of You Baby’, which sold more than 200 million records worldwide, with three songs featured in the smash hit musical Jersey Boys and Randell & Schippers having scored a major video and a number of national dance hits and performed on the 2009 Jerry Lewis MDA Telethon. GI Jams aims to give back to our troops by releasing their music into the mainstream. GI Jams recently teamed up with EMI, which allows talented military musicians the opportunity to have their songs featured in movies, shows, commercials, and video games. GI Jams has been featured by international media including Reuters, CNBC, MSNBC, Forbes, and Navy Times since its launch, and has received support from the likes of Senator John McCain who visited with Randell and Schippers at a homecoming event for Joe Speed Band returning from active duty in Iraq. Las Vegas Mayor Oscar Goodman recently proclaimed May 20 as “GI Jams Day” in the city.

You don’t want to miss the chance to program this shining example of how our national heroes keep up their courage and will to fight overseas. This track is directly from the increasingly popular GI Jams Vol. 1, which we’d love to hook you up with for your consumption and fan giveaways. For more info, call Andy Gesner at 732-613-1779 or e-mail us at info@HIPVideoPromo.com . You can also visit www.GIJams.com to find out more about the Joe Speed Band and GI Jams.