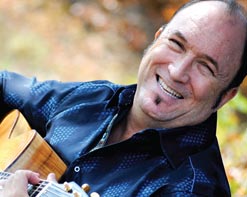 John Tracy is an artist who can serve as an inspiration for all walks of life. Young or old, it’s never too late or too difficult to pursue a creative passion. While some push hard and burn out at an early age, John’s priorities were different while he prioritized both professional and family growth. When the desire to pursue his art became a priority in his life, he had an endless amount of inspiration to draw upon, which allows him to offer a perspective that is different than most, but also much more relatable to a wider audience. His heartwarming new video for “Happy Ever After” is a touching clip that shares the love and joy of living a life of happiness and love with the perfect person at your side.

Twenty-five years in to a fulfilling personal and professional life he came to the stark realization that his creative side could no longer be suppressed. He had been writing songs all along, but in 2006 he left the corporate world and jumped into life as a performing songwriter. He has studied the craft of songwriting with some of the industry’s best including Don Henry, Ellis Paul and Steve Seskin, gaining a reputation as a lyricist who cuts right to the heart of the matter, impacting us with each word and note. His dedicated effort to giving each song something sonically unique makes listening to his body of work a delight to the ears. He draws on his influences from folk, blues and acoustic rock, adding modern elements and mixes in relatable themes to make music that is relevant to all of us on this human journey.

His new single for “Happy Ever After” combines elements of modern country performance and pop songwriting sensibilities. The song is a walk down memory lane about a couple that has spent a lifetime dedicated to each other and the commitments they honor. For the video we see juxtaposing couples that show the various stages of these relationships. Whether it be 65 years in, a marriage proposal, or the joy of raising a family, each step along the way is captured. Throughout the clip John provides the soundtrack, performing for the camera in a variety of settings. Some shots are him in a dark room, and others offer sweeping grandeur of him atop a mountaintop with miles of endless beauty behind him. It’s a beautiful clip all around and an uplifting and positive message everyone can get behind.

John’s music can be described as “Real Music for people living Real Life,” which is why we’re confident programmers and viewers alike will get behind this new video. We would be happy to hook you up with anything you may need to get this video into your programming, including his new album I’ve Got To Find Myself. Please don’t hesitate to get in touch to let us know what we can do! Contact Andy Gesner and the HIP Video Promo staff at (732)-613-1779 or email us at info@HIPVideoPromo.com for more info. You can also visit www.JohnTracyMusic.com/.