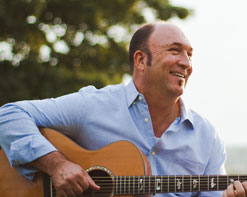 When we introduced viewers and programmers to John Tracy, we were eager to share with everyone an artist whose refreshing approach to music and songwriting would appeal to the masses. In “Happy Ever After” John sang about the pure joy and adulation of a lifetime of love while telling the story of a couple whose relationship has stood the test of time. In his new single for “Fairytales Come True” he continues to celebrate love, happiness and a commitment to the things in life that matter most.

When John Tracy decided to leave behind a comfortable life in the corporate world to pursue his art it was pivotal moment for both him and his family. This is the kind of dream many artists imagine for themselves but for a variety of factors never pursue. Often times the support is lacking from family and loved ones. You’re too old. You can’t leave your career. The reasons are abundant, but none are as powerful as the draw to create. Fortunately for John Tracy he is surrounded by a loving family that supports him 110% and pushed him in the right direction. After studying songwriting with some of the industry’s best including Don Henry, Ellis Paul and Steve Seskin, he has gained a reputation as a lyricist who cuts right to the heart of the matter, impacting us with each word and note.

In his video for “Fairytales Come True,” John once again narrates a tale of love and romance. A young boy and girl connect on a playground, but in their minds they are a medieval prince and princess finding each other in a far away land. And though the youngsters only spend their time on the playground their minds and imaginations run wild as they dream of adventures across all of the land. As John performs for the audience on the other side of the camera, his own inspiration and personal fairytale appears onscreen at his side. His beautiful wife radiates the same love and adoration for John that he sings about in his song. Sometimes inspiration is abstract in music, but in the case of “Fairytales Come True” it is right there for all us to see.

John’s music can be described as “Real Music for people living Real Life,” which is why we’re confident programmers and viewers alike will get behind this new video. We would be happy to hook you up with anything you may need to get this video into your programming, including his new album Happy Ever After. Please don’t hesitate to get in touch to let us know what we can do! Contact Andy Gesner and the HIP Video Promo staff at (732)-613-1779 or email us at info@HIPVideoPromo.com for more info. You can also visit www.JohnTracyMusic.com/.