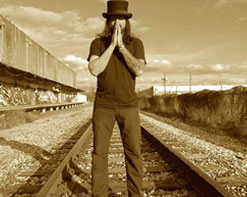 As an experienced songwriter/ musician, John Vincent Curry has seen all sides of the music business, including the climb of his rock band goneblind with major label deals to being a recording/touring musician for ex-Creed frontman Scott Stapp. Currently, JVC plays up to 250 shows a year as a solo artist/songwriter with his rock band Hounds Of Jezebel in Houston, TX. With his brand new music video for “Still The Same,” John Vincent Curry delivers a one man performance that strikes at the rift in racial relations, hitting listeners with a heartfelt plea for common humanity.

“Still The Same” gets right to the point, using a minimalist approach to deliver a strong message. Curry and song/video producer Mitch Burman elected to use the simple power of black and white carried throughout the video which was artfully shot through the lens of Amir Valinia at AV1 productions. The strength of “Still The Same” is its subtle, creative approach which allows the message to resonate loud and clear, provoking thought about the current state of affairs in our neighborhoods, in our politics, the judicial system and rising immigration fears. Most striking is the black and white face paint applied evenly to each side of his face. The video then flips the script and everything that was black is now white, and vice versa. It adjusts reality, painting a completely different picture of John Vincent Curry, but despite this, he is still the same person.

John Vincent Curry, resides in Houston, TX, one of the most diverse cities in the U.S. with a relative harmony in ethnic relations. His message comes from the heart, both personally as well as musically. We hope you will fully embrace “Still The Same” and include it in your video programming. Please contact Andy Gesner and the HIP Video Promo team at (732)-613-1779, email us at info@HIPVideoPromo.com. You can also visit www.Facebook.com/JohnVincentCurry for more info on John Vincent Curry.