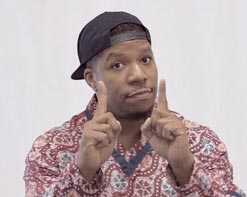 You may not think you know JoN De PLedge and his new video “No Sense,” but the truth is he has already made a big impact on the music video community! In late 2012 we presented you with a video called “Feel Good Music” by The UC (Uptown Celebrities), a Chicago hip-hop group that made a concerted effort to celebrate the creation of music that is both profound and infectiously memorable. There was no talk of sex, violence, drugs, or any of the topics that drag too many promising artists under because they trade substance for cheap thrills. Today, we want to re-introduce you to JoN De PLedge, one-fifth of The UC, who has struck out on his own as a solo emcee and continues to carry the torch of socially-conscious hip hop with his brand new jam “No Sense”

JoN De PLedge may have been raised on the rough streets of Chicago, but that never deterred him from immersing himself in music with a positive message. Music that could make some dance and others uplift the people in the communities. With his new mix tape in the works entitled SuPa Cool, Pledge will be presenting his best work yet, bringing listeners back to a more innocent era of hip-hop all the while maintaining the modern presentation and edge that so perfectly captures his soothing voice and flawless delivery.

For the brand new single “No Sense” he has kept to his goals of dropping no-frills jams that stand on their own musical merit to get our heads bouncing and our feet tapping. Lyrically the song is an honest indictment of all the fakers and frauds in the scene who talk a big game about trailblazing and trendsetting, but in reality are merely followers and hanger-ons. He sums it up perfectly by declaring “trendsetters are cool but followers are lame. Better buy you a drill and just create a lane.” He also enlists his buddy Add-2 to fly in for the last verse and give us all more to chew on.

Visually the video stands by the same principles; it doesn’t need to be flashy or over the top, it just has to get you moving! PLedge and his crew, along with Add-2 stand confidently in front of a white camera espousing to the audience on the other side of the lens. A few colors are splashed in here and there, but the real meat and potatoes of this clip is the performers and their confidence and conviction. This is a delivery that most definitely MAKES SENSE!

It’s our treat to be working with JoN De PLedge once again to bring you his outstanding jams. Please contact Andy Gesner and the HIP Video Promo crew at (732)-613-1779 or email us a info@HIPVideoPromo.com for more info on JoN De PLedge.