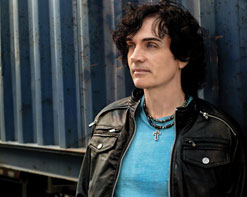 Jon Mullane is an award winning rock singer-songwriter from Canada who has gained international acclaim and success with his music. He’s had several Canadian top 40, Billboard-charting radio singles, and his song, My New American Girl, broke into the top 40 at #32 on the Hot AC Billboard Chart in the US. His songs have been featured on numerous television shows, commercials and sporting events, including his hit single, Make You Move, on NBC promoting the Beijing Olympics.

Jon’s song, Born Beautiful, encourages all of us to embrace the beauty we can find within ourselves, and through this song and its video, in which a young woman rejects suicide, he has formed partnerships with mental health organizations, including the Canadian Mental Health Association (CMHA.org), the National Alliance on Mental Illness (NAMI.org – US), and the Campaign to Change Direction (changedirection.org – US), to help raise awareness and change the culture of mental health. The video was produced by Dillon Garland, whose direction allowed Mullane to take his vision for the song to a different level.

Jon is the subject of a new documentary, “Jon Mullane – Shine On” by John Rosborough of RPM Productions in Halifax, Nova Scotia, Canada, which documents Jon’s musical career as well as his personal struggles and triumphs. The condensed version of the documentary culminates with the worldwide digital release of Jon’s album SHINE on September 16, 2016, and was premiered at Jon’s album release party in Hollywood on September 15.

Jon’s new album, SHINE, picked up an award for Rock Album of the Year at The International Music & Entertainment Awards, and the video for his single, Any Other Way, won Best Music Video at The 2014 Hollywood Music in Media Awards. The video for Born Beautiful has been nominated for the 2016 IMEA for Best Music Video and Jon has been nominated for Best Pop Artist. The video for Born Beautiful and the documentary have both been submitted to the 59th Annual Grammy Awards in the categories of Best Video and Best Music Film, respectively.

Jon is a dynamic performer, whose songs instantly connect with audiences in any concert setting, large and small, and his list of concert appearances is extensive, including performing at such legendary and iconic venues as The Viper Room and House of Blues in Hollywood, CA and 12th & Porter in Nashville, TN.

As his inspiring story continues to unfold, Jon Mullane defines what a real artist is… embracing an unbridled passion for and dedication to his music, combined with an authenticity that connects him with his fans. It’s a pleasure to be a part of the Jon Mullane promotional team, and we are here to do anything we can to get this video into your programming! Please call Andy Gesner and the HIP Video Promo team at (732)-613-1779, email us at info@HIPVideoPromo.com. You can also visit www.JonMullane.com or www.ACRManagement.com for more info on Jon Mullane.