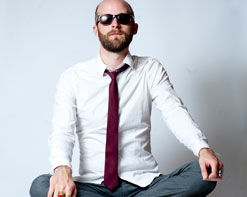 Jonas Martin has fought all his life to find something unique in himself. It was in this search that he found a sarcastic songwriter. Not a hugely unique one but a writer that is always looking and striving to be and say something more. To capture the essence of the people and places he encounters in the time and world that he lives and to share his own perception in a satirical style. One day, he’ll look in the mirror and say, “there you are”, but until then, he’ll continue to write songs.

After linking up with indie rockers Goodnight Ned he became a prominent member of the Dallas music scene, collaborating with a multitude of artists, as well as sharing the stage with everyone from Leon Russell to Cake to Polyphonic Spree. Goodnight Ned has earned awards all over the DFW area including “Best Album” and “Best Rock Act” by the Dallas Observer.

In that time he’s also stepped into his own as a solo artist. On his first solo endeavor, Chokecherry Jam, Martin gave listeners a direct line into a heartfelt, if often times wry, way of thinking. For his newest release, The Color Scheme, Jonas keeps his trademark wit intact, but also digs even deeper into his personal world by dedicating the record to one of his biggest influences, his late father. Songs about love, loss and Martin’s political and social beliefs, reflecting his changed emotional outlook on life after the loss of his father. Which leads us to the brilliantly constructed new single for “Let Them Drown,” and the mesmerizing and meticulous video that comes along with it.

This Jon Collins-directed clip is quite a sight to behold. The video follows Jonas as he acts as our tour guide through a variety of vices and abstract visuals that run the gamut of modern society. As the camera slowly pans from side to side images flash across the screen like Jonas’ stream of consciousness has come to life. Whether it be a bizarrely disastrous child’s birthday party, a man literally drowning himself in gluttony in his bath tub, or the assorted cast of oddball characters popping up throughout, this is a truly eclectic and not-so-endearing group. But throughout Jonas keeps his head up and outlook clear. Sure, it may be a motley reflection of modern society, but Jonas isn’t sweating it. With tongue fully in cheek, Jonas reflects the greater cultural indifference to the world’s problems as he tosses everyone else’s problems aside. He’s good with himself, he’s doing what he wants, and everyone else? Let them drown.

We’re all super excited to be working with Jonas Martin to share this outstanding new clip. Past clips by Sarah Jaffe, Deep Blue Something, and The Fixx have shown us the directing skills of Jon Collins, and we think “Let Them Drown” might be his best work yet. Please get in touch with us here at HIP Video Promo to let us know what we can do to get this video into your programming. You can contact Andy Gesner and the HIP Video Promo staff at (732)-613-1779 or email us at info@HIPVideoPromo.com . You can also visit http://www.JonasMartinMusic.com for more info.