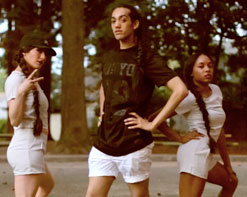 Joshua Hatkins began penning rhymes at 16 and hasn’t stopped since. This story might sound somewhat unremarkable, but while most artists strive to emulate their idols, the rising Portland, OR rapper has worked hard to carve out a lane all his own. With an impressive and completely unique sound that lands somewhere between the realms of hardcore hip hop and Top 40 pop music, Hatkins’ knack for masterfully blending influences from various genres, cultures and time periods sets him far apart from the competition. Feeling both new and refreshing yet familiar and classic, Joshua Hatkins is one of those extraordinary rare emcees that needs to be heard.

After dropping a series of well-received remixes of popular songs this past summer (Chance The Rapper’s “No Problems”, Justin Bieber’s “Company”), it has all lead up to the release of “Time to Waste”, the powerful single off Hatkins’ long-awaited upcoming mixtape Pop Boy Rap. Showcasing his signature sharp, yet laid back flow, “Time to Waste” paints a vivid picture of his dealings with a girl fighting for his attention. This relatable song features one of the catchiest choruses in recent memory, and manages to connect with just about anyone whose ever been forced to juggle commitments vs. temptations, ie: everyone. In a nutshell, the song perfectly captures the vibe of balancing.

Shot in his home city of Portland, OR the “Time To Waste” music video is a chill affair. Despite being filmed with limited funds, viewers would never suspect it. Masterminded by Hatkins himself who commuted across “The City Of Roses” for over two weeks to find the best places to shoot, was his own stylist (buying all the major wardrobe pieces himself) and recruited his own cousin for hair and make-up, the video is in fact a kind of American struggle story where one is forced to make their own way out of nothing. Throughout the beautifully crafted video Hatkins is featured hanging out in various locations with two impressive women who are dancing their butts off. Josh and his crew post up for the camera in front of a store, on the playground, and in a nod to the Japanese countdown in the lyrics, inside of a minimalist dojo, it’s simple visuals so perfectly placed and executed.

Hatkins’ seemingly effortless ability to rap for days while maintaining such a relaxed but powerful presence is a sight to be seen and precisely why he’s become one of the most promising young rappers of 2016. This is why it’s our distinct pleasure to bring Joshua Hatkins to your attention and back to your screens! All of us here at HIP Video Promo are huge fans of his one-of-a-kind musical aesthetic and hope you’ll embrace him like we have. Please contact Andy Gesner and the HIP Video Promo staff at (732)-613-1779, email us at info@HIPVideoPromo.com. You can also visit www.Facebook.com/JoshuaHatkinsOfficial for more info on Joshua Hatkins.

For info about other Joshua Hatkins music videos, click HERE