Josie Cotton “Maneaters (Get Off The Road)” 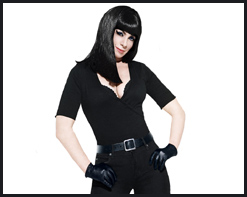 Hey there music video aficionados! It’s Andy Gesner and my staff here at HIP Video Promo. When Johnny Knoxville used “Johnny, Are You Queer?” in the second Jackass movie, he gave himself a fitting theme song. He also reminded everybody about one of the most consistently entertaining singers of the American new wave: Josie Cotton, whose bratty insouciance and sure hand with a melodic hook had no rival in the early Eighties. Her performance in the iconic Valley Girl – she placed three songs on the landmark soundtrack, including “Johnny,” “School Is In,” and the propulsive “He Could Be The One” – epitomized everything that was exciting about the era. But while Cotton is most associated with the day-glo era, she’s been making fantastic music ever since, and adapting her voice and her elastic songwriting to suit contemporary styles and specific projects of her own choosing. It may have taken a jackass to make that clear – but now Josie Cotton is back squarely in the public eye, and indie music is much better for it.

If you couldn’t tell from “Johnny, Are You Queer?,” Josie Cotton is instinctively theatrical, and slips in and out of characters’ voices effortlessly. Frightened By Nightingales, her 1996 release, was an accomplished work of art-rock: moody, gauzy, seductive, and miles removed from the playful power-pop of her 1982 debut. Movie Disaster Music, her widely-praised 2006 release, was another reinvention – one that captured the sinister spirit of film-noir. Now, Josie Cotton has returned with Invasion Of The B-Girls, a tribute to the camp and cinema of the sixties and seventies. Inspired by John Waters and Russ Meyer, Invasion Of The B-Girls, an album of covers of B-movie theme songs (a truly unique and original concept), contains a love song intended for Godzilla, and tales of bloodlust, revenge, and clueless men getting their comeuppance at the hands of lascivious women. “Maneaters (Get Off The Road)”, the first single, is Cotton’s revisiting of She-Devils On Wheels, the 1968 B-movie classic about an all-female motorcycle gang that terrorizes South Florida. Cotton delivers her narrative with verve and a confrontational attitude: her love for her source material is apparent, and she makes it infectious.

Josie Cotton’s singing voice hasn’t lost any power over the years; if anything, she’s more energetic and expressive now than she was during her reign as a new wave hit maker. And as the clip for “Maneaters” proves, she looks as fantastic now as she ever has. Cotton has always been an eyeful, and her superb taste in vintage clothing and hairstyles distinguishes her even among revivalists – she’s no casual cinema fan, she’s a true believer who’s worked to get all the details right (her go-go dancing is similarly impressive). The “Maneaters” video looks like a B-movie; it’s Technicolor and over-the-top, delightfully garish and surprisingly fashionable. Josie Cotton plays the leader of the all-girl motorbike pack – one of her gang-members is L.A. punk-rock mainstay Ginger Coyote – and she rips up the road with glee. Flanked by her lieutenants, she rides high on her chopper, challenging any man to get in her way!

We’re all super stoked to be working with Jonathan Keith and his staff at Scruffy Records for the first time ever! We’ll have plenty of copies of Josie Cotton’s latest, Invasion Of The B-Girls, for all of your programming needs and on-air giveaways, and also Josie Cotton video IDs upon request. If you need more info, call Andy Gesner at 732-613-1779 or e-mail us at info@HIPVideoPromo.com.